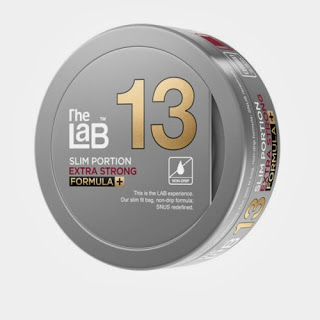 Updated: 24 January 2013: The SnusCENTRAL eStore has shed some light on this new product. Formula+ in the title is a reference to the flavor, which is described as "Energy Drink". Due to some research they've found the demographic in Norway that is being targeted with this release like both strong snuses and energy drinks, hence this release. I was sad to find out The Lab Series: 13 does not contain caffeine, taurine or any other added ingredients to boost energy. This is something I was really hopeful for, as I've wanted someone to make an energy boosting snus for a long time, but I'm guessing I'll have to keep waiting! This snus has an increase of 2% in nicotine content, which will give it that added strength to, I guess, simulate the effect of an energy drink.  I look forward to trying this snus, just to see how the added nicotine and flavor profile will simulate an energy drink.  I think it should prove to be interesting.  That being said, why has nobody made a snus like Elixyr Power Energy yet?  It's been 5 years, it's time to start experimenting, manufacturers.  It can be done, so let's get out there and do it.  Back to Lab Series: 13, this snus should be available soon - in Norway, and select eRetailers.

23 January 2013: Since a snus I used to love, Elixyr Power Energy was discontinued, I've been looking forward to an energy snus. I think at one point in time I've pitched this idea to every snus company under the sun, to make an energy snus. It looks like my wish has come true. 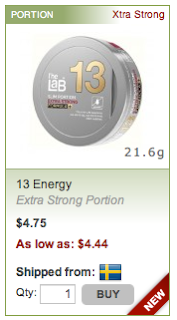 In this photo discovered on Northerner.com leading to this product info page, it appears as though Swedish Match is readying a new snus in the Lab Series, 13. Though the pic is small, and no higher image art could be discovered at this time, from what I can tell, an energy snus is being added to the Lab Series, and it will be an "Extra Strong Slim" portion. Start getting excited, it looks like my dream has come true and somebody finally listened to what I've been screaming for years! I'm investigating for more info, so I'll be updating this article as more info is made available!
Posted by Chad Jones at 5:30 PM