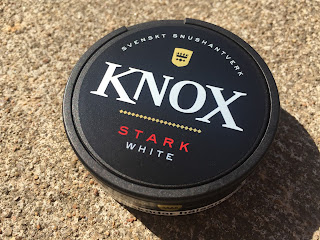 I've been revisiting and updating some of my old reviews recently, and the Knox line is one that I've been focusing on the past several weeks. This summer, I hosted the first ever Snus Con in St. Louis. It was an event for snusers from all over to come and hear from personalities in the snus community as well as industry professionals. Jonas Yden, Global Smokeless Director for Skruf, was one of the presenters at Snus Con.  One of the most interesting things I learned during that panel was that Knox is the #2 snus brand in Sweden.  I honestly had no idea.  After hearing that, I felt like I needed to revisit the Knox line. The flavor description for Knox Stark White says, "Knox Strong White is a snus with a robust tobacco aroma and flavor." Knox Stark White comes in a 19.2 gram can with 24 portions for 0.8 gram portions. The nicotine content is 14mg/g (1.4%), which breaks down to 11.20mg/portion. 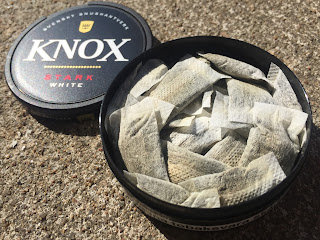 When you open a can of Knox Stark White, the aroma that comes through is a slightly sweet citrus smell. With most Skruf products, I pick up rose oil in the smell and taste. However, I don't notice that with the Knox line. The portions are quite soft and plump and feel great in the lip! The flavor is very citrus-centric, but it seems milder and more gentle than the usual bergamot taste. It's slightly sweet and not too bitter. I notice a sweetness in this snus that is close to a floral sweetness but slightly perfumy. I also don't notice a lot of pepper with this snus, and the salt balance is relatively low.  The flavor lasts quite a long time; I've found with this one I can keep it in for a little over an hour.  The nicotine strength feels to be at the strong level, and does provide a little extra nicotine kick.  It's not too strong, so if you're not a fan of extra strong/ultra strong snus you may find this one to be enjoyable!

As far as the Knox brand goes, it's pretty solid.  I can see why it's so popular.  If you're looking to save a few bucks, Knox is definitely something to look into!
Posted by Chad Jones at 6:22 PM