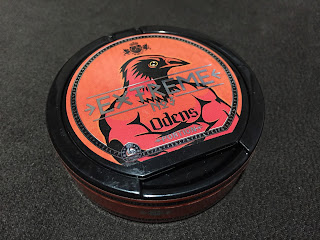 Oden's has been added a lot of new SKU's lately to their catalog. Recently I reviewed Oden's No3 Portion, Oden's No3 Los and Oden's Extreme No3 Los. Today I'm reviewing a new addition to the Oden's No3 line, this time it's Oden's No3 Extreme Portion.  I picked these two up in a recent order from Northerner.com. They seem to carry the entire range of Oden's Snus, so anytime a new one is out that's usually where I go to.  As this snus is an "Extreme" snus, it's a little on the stronger end than the regular Oden's Snus, so lovers of strong tobacco rejoice! 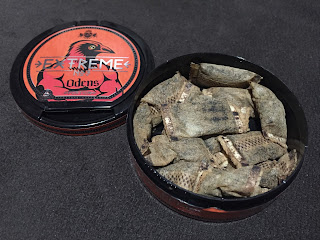 As I mentioned above, I recently reviewed Oden's No3 Portion, Oden's No3 Los and Oden's Extreme No3 Los. Today I'm also going to review the new Oden's Extreme No3 Portion. When you open a can of this snus the aroma that comes through is a dark and earthy tobacco aroma with hints of citrus. The flavor of Oden's No3 Portion is about the same, a earthy and rich tobacco flavor with a tart citrus flavor in the background and a mellow salt balance. It's a very traditional flavored snus, but the tobacco is more present than the citrus, which is nice, because most snuses have the citrus in the front and the tobacco in the back, so this is a nice little twist on the traditional flavor profile.  If you're a fan of traditional or tobacco flavored snuses, this is one to keep your eye out for.
Posted by Chad Jones at 9:32 AM