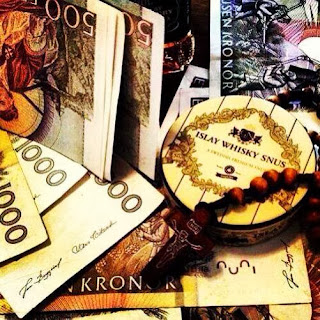 It's been a long time coming, but Islay Whiskey Snus is just around the corner. With no Kardus to look forward to this year, Islay is going to be the premium snus to look out for, for those of us who love a handcrafted snus. So, what exactly is so special about this snus? The description speaks for itself.   (Forgive the translation, it's roughly translated from Swedish)

"A tobacco expert meets a snus producer from the north. Old craft traditions brought to life and mixed with fresh ideas. Good and tasty tobacco taken home to Jämtland. The tobacco is stored in casks from Islay and stress sweats we snuff the fire room.

We have chosen the tobacco aftertaste , hence so are some of those not common in snuff production. Now, at a time when our colleagues in the industry are tobacco by price and low TSNA . It is obviously very important for us , but the taste has been the first priority for us. Tobacco's from Jalapa, Nicaragua, Ometepe, Nicaragua, Esteli , Nicaragua, Lancaster PA , U.S, Keta , Ho, Ghana and KwaZulu-Natal, South Africa." 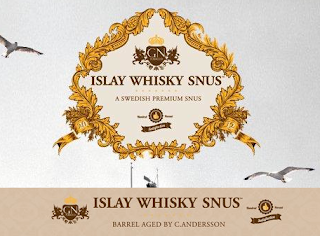 "In the snuff industry today is tobacco leaf midribs or plant fibers as a cheap utfyllnadsmatrial(?) neither gives flavor or nicotine. We go the more expensive route and only using pure tobacco ( Lamina ) all in order to make this snuff so good and flavorful as possible.

We use the ancient traditions, we sweat the tobacco in the fire room instead to pasteurize it. Pasteurization is an effective and quick process and has advantages in mass production. The time consuming perspiration was the way that all Swedish snuff was produced until 1981. When one sweats tobacco and does not stress it you get a cleaner and clearer tobacco flavor in the finished snus.

We store a portion of the tobacco in old whiskey casks from the island of Islay in Scotland. This is a process that can sometimes make use of premium cigar making, this adds an extra dimension to the taste, we put the tobacco on our favorite whiskey from Islay from the same distillery that has helped us with the drums. "

"I have made a snuff for me, for my taste. I enjoy good tobacco and good spirits. And if nobody else likes it then I snuff so 'll be fine in a few months." - Conny Andersson

This snus comes as a labor of love from the man once responsible for Kardus Snus, making his own small batch of handcrafted snus with the help of GN Tobacco.  I have yet to try it, but Conny Andersson is a tobacco guru, he's someone who knows tobacco more than probably anyone on this planet, and is a master at flavoring and selecting, so I can assure you without even trying this snus that it is going to be amazing.  As of right now, I'm not sure who is going to be selling this online, but you can pick it up at the following vendors: