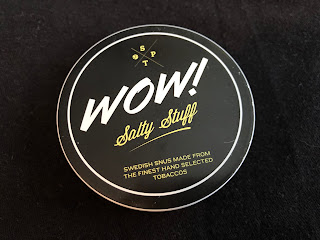 It's been a few years since I reviewed this one, but the SnusCENTRAL.com store just started carrying the WOW! line to the US, so I figured it was time to revisit them. WOW! is a product by SPT (Scandinavian Premium Tobacco) which, as of a few years ago, is now owned by GN Tobacco.  The WOW! line is unique in that it contains a very unique pouch size.  When I spoke with SPT back in 2013, they told me "The pouch is known as a "unisex" 18/30 - which is the middle size between mini and full size".

The flavor description of this product says, " WOW! Salty Stuff Licorice White Portion Snus is a value priced blend made from hand picked tobacco with strong licorice and salmiac flavoring." The can weight is 15 grams and contains 22 portions at 0.68g each. The nicotine strength is 8mg/g (0.8%), which is only 5.44mg/portion with the lighter/unisex pouch. 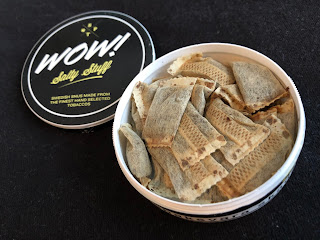 One thing to note, first, is that while this product is called a white portion, it obviously isn't a white portion.  I'm not sure why stores list it as a white portion, but they do.  Now, on to the review!  When you open the can, the aroma that greets you is a very present smell of black licorice.  One thing that I like about this one is that, in the aroma and taste, it isn't too sweet.  The portions, as mentioned earlier, are called white portions but are clearly not white portions. They are smaller, so I usually use two of them.  They aren't overly moist, so the flavor releases a little slower, but it also lasts a long time!  The taste is a present black licorice flavor that is rich and salty.  There's also a nice earthy tobacco character in the background.  The nicotine, when I use one, feels a little less strong than regular strength.  The flavor itself lasts up to an hour, which is quite impressive!

If you've never had this one and like salty licorice, I'd suggest giving it a try.  It's tasty (and salty) stuff!
Posted by Chad Jones at 10:59 AM