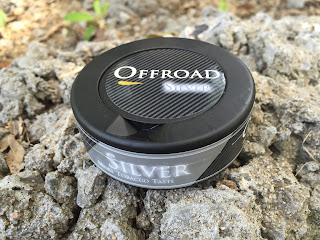 I recently picked up some Offroad Silver White Portion from the Northerner after realizing I haven't tried this yet, and I hadn't even heard about it until I randomly stumbled across it browsing their store. The can says "More Tobacco Taste" and the taste description says "A taste of classic tobacco", so going into this one I had a pretty good idea what to expect. 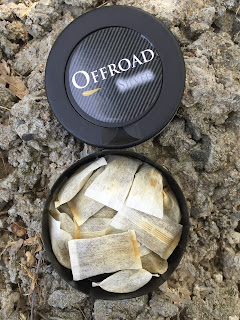 The portions are traditional V2 White Portions, soft to the touch but not packed very full and requiring a little bit of fluffing.  As the can is only 16grams, there's not a ton of tobacco packed into it.   Honestly, it reminds me a lot of Phantom Classic Brown but without the chocolate or juniper hints I picked up in the Phantom. The aroma is a very mild and earth tobacco taste, and the flavor is about the same - just straightforward and simple tobacco flavor. It's pretty mellow, however. If you've had Grov, it's kind of like Grov Lite. If you like straight tobacco taste, and want a value snus, this is definitely one to check out. The taste is mild, but simple.  The flavor takes a little while to come on - probably about 20-25 minutes to fully develop, but once it's developed it lasts quite a while.  I've had these portions in for up to 2 hours and been satisfied.
Posted by Chad Jones at 6:23 PM