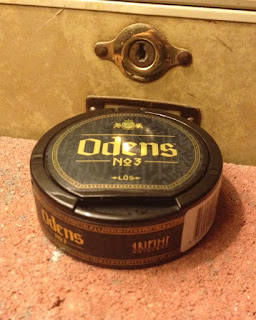 In the past, I reviewed Oden's Extreme Los, which was good, but lacked that traditional Swedish "bergamot" flavor.  This product is GN Tobacco's more traditional flavor. 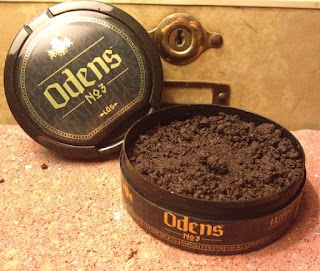 When I opened the can of Oden's No3 Los, the aroma that came through was predominantly an earthy tobacco with a little hint of citrus in the background. The grind is on the medium side, and the tobacco is quite moist. I found it very easy to handbake a prilla. The flavor is very remniscent of classic Swedish Snus.  It's not as bold as say, General, but it reminds me a lot of Granit - but the flavor is much more mellow.  The tobacco is more in the front with citrus in the back, and neither flavors are too bold - it reminds me of a white portion versus an original portion - how the white portion is always more subdued in flavor versus it's original portion counterpart, that's how the flavor of this snus is.  It mixes together quite well, it's really good.  The nicotine content isn't too strong, feels like 8mg-9mg, so about average strength.  The flavor lasts for about 45 minutes to an hour, very long lasting and little to no mudslide.  It isn't the usual snus where citrus is the predominant and very strong flavor, but they meld with the tobacco quite well to come through in a very mellow way.  If you dig GN Tobacco or just traditional Swedish Snus, this is certainly one to try.
Posted by Chad Jones at 6:29 PM