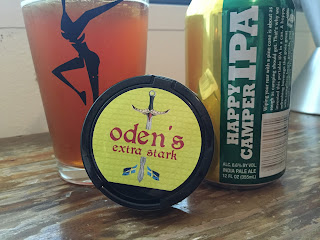 This review is an interesting one. GN Tobacco has two products with a lime flavor - Oden's Extreme Lime and this one, Oden's Extra Stark Lime. They both have the same flavor, but with a few differences. Oden's Lime Extreme is 22mg/g of nicotine, and Oden's Lime Extra Stark is 18mg/g of nicotine. They both also have different can designs. Both have a 50% moisture content. The product description for this one says, " Odens Lime Extra Strong Portion is a nicotine strong snus with a refreshing taste of summer fresh lime. The tobacco taste is noteworthy, however, resulting in a finely tuned pouch." 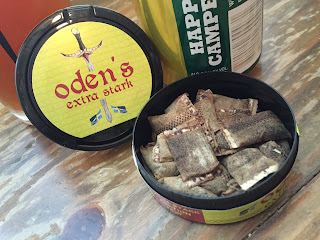 When you open the can, you'll notice the portions aren't quite as moist as Oden's Extreme Lime. But as far as the aroma and taste goes, the two are virtually identical. This one just doesn't have as much nicotine. The aroma is a very straightforward lime smell - slightly tart and without any added sweetness. The portions are dryer than most other Oden's original portions, but they're still comfortable and soft in the lip. The flavor and nicotine also release about as quickly as other Oden's original portion products.  The taste is a very natural, slightly tart and straightforward lime taste.  I don't really detect any tobacco with this one in the flavor.  It reminds me a lot of lime sugar free jello.  It's a really tasty snus!  This snus also pairs very well with a beer.