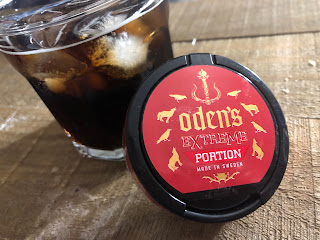 It's been quite a few years since I've reviewed this one.  Due to a new law in Sweden, they're mandating snus have at least 20 portions per can.  Most Odens products have traditionally had less than that, so with the new upgrade in portion count, I figured it was time for a new review!  SnusMe.com carries most of the Odens products and ships to the US, so I grabbed a ton of them on a recent order so I could do new reviews of them. Today, we're talking about an Oden's product with a cola flavor - Oden's Extreme: Kola (Original Portion)!  Yes, they do make those.  The flavor description for this one says, "A super strong portion with a taste of cola".  Each can weighs 20g and now contains 20 portions, for 1g portions.  The nicotine content is 22mg/g (2.2%), or 22mg/portion. 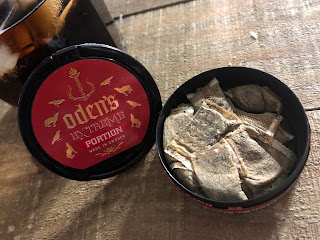 When you open the can, a lightly sweet cola smell comes through, along with a hint of cinnamon and a touch of earthy tobacco. The portions are nice and plump, with a good moisture amount and a quick release of flavor! The cola flavor is pretty gentle in terms of presence, and it's not super sweet, which I like about this one. I also like that I can taste a mild tobacco in the background, as well. There's also a light hint of cinnamon to this one, but it doesn't overpower the cola flavor. Being an extreme product, it comes with that extra strong nicotine kick to it. I find the flavor, on average, lasts about 45 minutes.  I enjoyed this one, though it's a bit too strong for me personally.  If you like extra strong snus though, this one is a must try!
Posted by Chad Jones at 2:04 PM