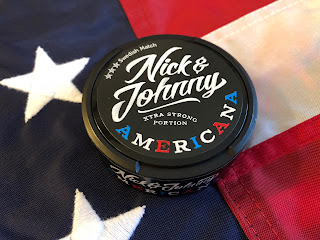 In all the years I've been reviewing snus, I think this snus is the one that has been the most divisive; it truly seems to be a love/hate snus. I know lots of people who love it, but I also know lots of people who don't like it. Personally, it's been a favorite of mine since it launched. In my opinion, it tastes like freedom. The flavor description for this snus says, "Nick And Johnny Americana Xtra Strong Portion Snus is an exciting snus with flavor inspiration from America's Rootbeer and Dr Pepper. This snus has a full-bodied tobacco character with clear tones of Cherry, wintergreen and cinnamon." This snus comes in a 22 gram can with 20 portions for 1.1 gram portions. Yes, you read that correctly - Americana portions are bigger than average. The nicotine content is 14mg/g (1.4%) which, with 1.1 gram portions, is 15.40mg/portion. 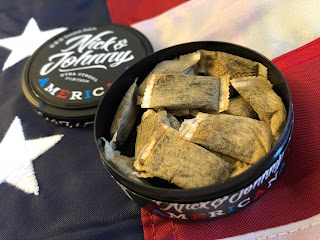 When you open the can, the aroma that greets you is mostly cherry, accompanied by a mild hint of wintergreen. There’s a mild hint of tobacco and a touch of cinnamon, as well. Remember, I’m not a big fan of wintergreen but for some reason I love this snus. That’s the magic of Americana. The portions are 1.1 grams each, so they’re nice and plump. They’re also pretty moist and have a quick release of flavor! The taste is pretty complex, but it works. It’s almost like a Cherry Dr. Pepper with a hint of wintergreen. That may sound gross to some, but I find it delicious. The flavor is mostly cherry, accompanied by a hint of wintergreen and a little cinnamon. In the background you’ll find a mild earthy tobacco character and a little nuttiness. It sounds complex, again, but it works. The nicotine kick feels to be between the strong and extra strong level. It has a nice kick, but it’s not too strong. The flavor lasts about as long as most original portions, usually the 45 to 55 minute mark. 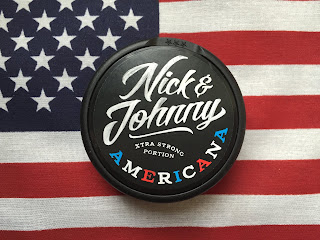 Again, Americana is a love/hate snus, so I can't say whether or not you'll like it.  I can say that I really enjoy it and I think it's worth a try if you've never had it before! 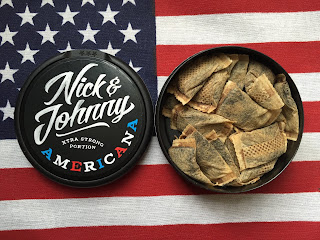