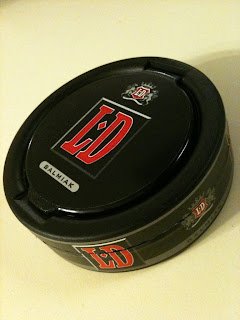 This product has been discontinued and is no longer for sale.  There are now two snus products with a similar flavor - LD Salmiak Original and LD Salmiak Vit.

LD Black is another one of those "banned snuses" we've been talking about lately, it's a product from JTI Sweden, and they currently are not registered with the FDA. So this review may not be helpful to those in the US, but as we have a large range of international viewers, I figured I'd review it anyway. This isn't me being a smartass and saying "Look what I have!", but just my way of helping out the international snusers. I went ahead and picked up a roll of it before PACT went in when I was stocking up on a lot of my favorites. LD Black is a one of a kind snus. It's a black portion, which isn't that common in the snus world outside of a few other brands, but what makes it different is that it's the only original black portion. I know you're asking, "Wait, what?" Let me explain. Most black portions (Onyx, N&J, Grov, etc) are white portions in a black teabag type material. They don't go through the extra step at the end of production that adds moisture to the bag to make it an original portion. LD Black, however, is an original portion, meaning it does go through the extra step at the end of production to add moisture to the bag. 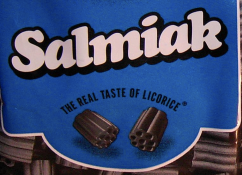 LD Black is officially "LD Salmiak", according to the can. If you don't know what Salmiak is, it's a kind of salty licorice. Traditionally, I'm not a fan of Licorice in snus. I couldn't get much into the Offroad Licorice or the Oden's Lakrits, both of which have a strong licorice flavor. To date, the only ones I've been able to enjoy have been this one and the Fellinni Lakrito from V2 Tobacco. Usually I'm not a big black licorice/anise/salmiak fan, but I find LD Black to have the perfect balance of these flavors. 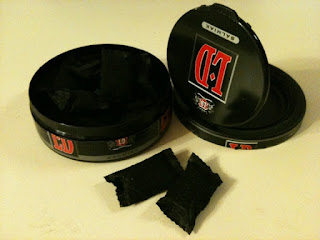 I love the LD cans. They have that cool, hinged catch lid at the top in the LD snus line (Gustavus also has this). I think it's an added bonus. Now, about this snus. When you open a can of LD Black, you smell licorice. (what else were you expecting?) But it's a very mellow licorice aroma, which is why I find it so approachable. When you put a portion in your lip - it's like a snus made out of clouds. It's the softest portion you'll ever encounter. You can quote me on this. LD Black is the absolute most comfortable and softest snus portion available to date. Period. There is no snus (and I've tried alot of 'em) that comes anywhere close to the level of comfort LD Black provides in the lip. As mentioned above it's an original portion in a black portion bag, which means you get the experience of an original portion with the look of a black portion. The flavor becomes apparent much quicker, and there is a little drip that goes with this snus. The taste is great - a very mellow taste of black licorice/anise/salmiak and a pleasant salt flavor to balance it out. LD Black isn't like a traditional snus where you're picking out hints of certain things, various flavors and subtle undertones. It is what it is. A very mellow black licorice flavor. Whether you are or aren't a fan of licorice, you owe it to yourself to at least give this one a try. If anything, just to feel how comfortable the portions are - because that's worth buying a can.
Posted by Chad Jones at 8:57 AM