Okay, after a lengthy break between reviews, here are the final 3 cans in the Thunder Original Test Series. As I said before, these are meant to be tried one after the other, as all the flavors are different - for you to be able to pick up and full appreciate the differences it is best to take them seperately, I even suggest seperate days. Snus can tend to blend together when you go back to back, especially with the traditional flavors, so I urge anyone who is about to break into this 5 can test series to take it slowly and try them all at different times. 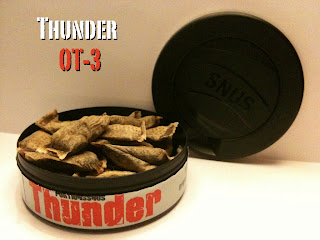 Thunder OT-3 (Original Test 3). After trying the last two and experiencing more traditional flavors, I was curious to see how the final 3 would line up and what their taste profiles would be. When I cracked the can of OT-3 I was greeted with a very sweet aroma. No hints of citrus to be found, just a sweet aroma coming through. The portions are, as mentioned before, like the new Offroad portions, moist original portions, but not so moist that they're oozing. Which I like. These portions are also packed full and fit very comfortably into the lip. I'm hoping that whichever portion wins in the end will continue to keep this profile. The flavor of these is the much rumored "American dip clone" flavor, it was very easy to tell. Not that I'm a dipper, but what little experience I've had with traditional American tobacco led me to believe that this was an attempt at that type of flavor. With good cause, of course, there's not many on the snus market that resemble that flavor. This snus is simple. A sweet, rich tobacco flavor with a nice salty undertone to tie it all together. I want to say I detect rose oil, much like in the Skruf line. There's not much more I can say about it other than that. Not bad, not bad. Final opinion - Reminiscent of American dip. Sweet, rich tobacco flavor. 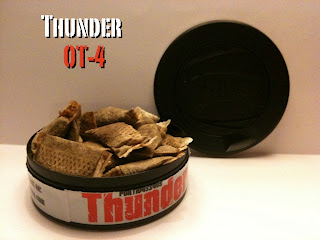 Thunder OT-4 (Original Test 4). This was a tricky one, this one has a lot going on. The aroma of this particular snus is slightly sweet, with subtle floral notes, and a spicy tobacco aroma. The portions continue in the grand tradition of this series being original portions, but not overly moist. Packed full of tobacco and having very good mouthfeel. (I rarely use that word, it looks funny just to type it, but I thought I'd throw it in to spice things up a bit). I really enjoy this one, because it seems like V2 spent a little more time on this one to add a very complex flavor profile. There's a lot going on! OT-4 has a really bold tobacco flavor, with slightly sweet floral notes (very subtle), a nice peppery/toasty kick, and a pleasant salt balance wrapped around these flavors. I'm not really sure what V2 was trying to accomplish here, I heard Lucky Strike clone thrown around, but I've found this snus to have a much more complex flavor. I didn't really pick up any citrus flavor in this one, to be honest. Final opinion - a very complex snus with a lot going on! 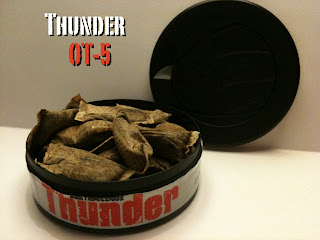 Thunder OT-5 (Original Test 5). And finally to the last of the test series. So far we've had traditional flavors, complex flavors, simple flavors, to be honest the previous 4 really had such a big span that I wasn't sure what to expect with this last one. The portions are much like the previous 4. Packed full of snus, these portions are the same original portions I've enjoyed in the previous cans - moist, but not overflowing or oozing moisture. Very comfortable in the lip. The aroma of this one harkens a lot to Retro or Olde Viking Original, in my opinion, it's the closest thing I could think of to compare. A simple, mellow tobacco aroma, very traditional. The flavor is very simple. Whereas test 3 was a sweet, rich tobacco flavor, I find this one to be close, but without the sweetness. Which is why I mentioned Retro/Olde Viking Original in the aroma, that aroma stayed true in the taste department, too. There is a very slight citrus flavor, but for the most part the taste of this snus is a very simple tobacco flavor with mild citrus notes, very little salt flavor, all wrapped up in a very mild experience. To be honest, I am going to officially pick this one as my favorite. It's a strong snus with a very simple, very mild flavor. I'm not a big fan of sterks, but when I want something strong, I want a strong nicotine kick, not a strong flavor kick. So the fact that this snus has a very mellow flavor with a hell of a nicotine kick, I'm going to pick OT-5 as my favorite of the Test Series. Final opinion - My pick out of the 5 samples. Retro Extra Sterk? Olde Viking Original Strong Portion? Tastes like it. But a great snus, none the less.
Posted by Chad Jones at 1:36 PM