Over the next few days we're going to be checking out the new Thunder Test Series and writing our opinion on this new offering from V2. Keep in mind - these products are tests, and I don't advise people to use them back to back because you will find the tastes may blur together, so take your time with them. V2 is listening to our feedback and one of these products is going to survive. 1 shall stand, 4 shall fall. And it's up to us to make sure we provide quality feedback so that the best snus will come out on top in the end. 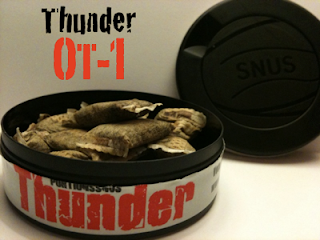 Today we're going to be checking out OT-1 and OT-2. Going into this, I wasn't sure what to expect. I figured they would all taste pretty close to the same, but the first two cans that I went through quickly changed my opinion on that one. OT-1 (Original Test - 1) was the first can I cracked out of the 5. Being OCD, I like to go in order. When I opened up this can I smelled a strong aroma of citrus/bergamot - which clued me in that this was going to be the traditional flavored snus out of the 5. The portions are also very unique - I believe V2 may be doing something different with these as well. They resemble some of the new Offroad portions - original portions but not soaking in juice. These portions are also packed full and are very soft and comfortable in the lip. The flavor of OT-1 is a mild citrus flavor mixed with a mellow tobacco flavor and a little salt thrown into the mix - as I said, it's a traditional snus. If I had to have a "safe bet" so far going into this, I'm going to say OT-1 would be acceptable to me if it passed the tests. This snus had very little drip and a pleasant aftertaste and a hell of a nic kick since it is a strong portion. Final opinion - great traditional flavored snus. 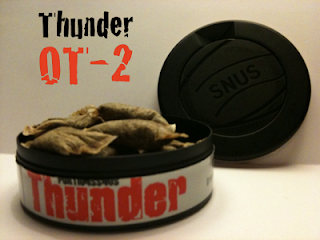 OT-2 (Original Test 2) was the next can to come under the microscope. I would almost bet money on it tasting and smelling similar to the other one, but I was pleasantly surprised with a different experience on this one. As I said above, the portions on this one are close to the new Offroad portions, moist but not oozing, and very comfortable in the lip. The aroma that comes through is a slightly citrusy aroma, a gentle tobacco touch, and it's got this musty thing going on that I can't really explain, but the smell comes through as musty. I searched my extensive bank of "Snus Review Words" and couldn't find one, so that's the one I'm going to use a bit to describe this one. The flavor is slightly sweet, citrusy. It's kind of like a mellow, mild, subdued Gustavus without the floral notes. A little salt in the background but not too noticable. Part of this even reminds me of the Swedish Camel Original snus, but much more subdued and mild than the pronounced flavors of Gustavus or Camel Original. Final opinion - Slightly sweet citrus snus, a little musty, reminiscent of a very mellow Gustavus or Camel Original.

Those were the two I got to today. I'm taking these slowly so I don't let the flavors mix too much, and I don't use many strong portions so I don't want to get too much of a headrush from all the nicotine. Next review will break into more of the Original Test Series from V2!
Posted by Chad Jones at 1:15 PM