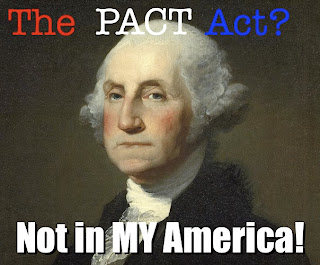 The Buffalo News reported today that Red Earth, a Seneca Retailer, has been granted a stay and is temporarily allowed to mail his tobacco products via the USPS, despite the requirements of the new PACT Act/Law that bans mailing of tobacco via the USPS and requires a carrier that age verifies upon delivery. This comes with news about shops closing due to the effect that PACT is having on their businesses. It seems as though "for the children", "to prevent terrorism", and other BS terms thrown around by the government are really starting to show through for the truth they represent - to simply pad the pockets of politicians. But did we think differently? We knew all along what the PACT Act was about. Opposition is rising, and you still have a voice. Granted, Big Brother doesn't want to hear it. Sidney Hook once said, "To silence criticism is to silence freedom.". Don't let your voice be quiet. Join the opposition to the PACT Act/Law if you are a reader/viewer of this website in a new petition.

Sign the petition, "Opposition to the PACT Act (Snus/Smokeless Users)".

Help by sharing it in your circles of friends/colleagues, Facebook, Twitter - anywhere you can! This is the time to unify as a body of smokeless tobacco/snus users and stand up for our rights.
Posted by Chad Jones at 9:30 AM