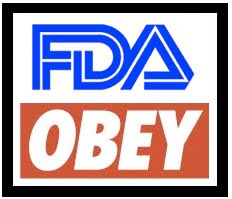 As I was updating the website tonight to include the new FDA compliant ads, it dawned on me that I haven't written much about the Tobacco Control Act that went into effect yesterday, 22 June 2010. I've been so bummed about it and the effect it is going to have on snus and snus users that I didn't really want to write about it, to be honest. But it's in effect now, and as I have been known to do in the past, I felt that a little article/rant was in order. I'm sure everyone knows already about the relabeling of cigarette boxes. The Tobacco Control Act is banning the use of terms such as "light", "ultra light", "low tar", and things of that nature - so that part doesn't really affect snus users other than one key area that I was hoping I would someday see on a snus can. That snus is a reduced harm product that can be an effective method to help people quit smoking. That dream has since been crushed. 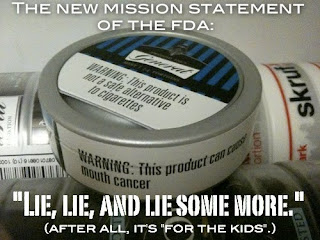 As you may have noticed on recent orders of snus coming in, the new labels are on all the snus cans now. This one is my favorite because it has two blatant lies on one can of snus. Snus is a safer alternative to cigarettes, and to date it has not been proven that snus causes any form of oral cancer. Those are two facts that are blatantly being lied about due to rules enforced by the FDA. These new warning labels are mandatory not just on snus cans, but if you've noticed in our ads, the warnings are now present in the ads, as well. I've written more in the past, in this article, and this article that I don't agree with the warning labels on snus. I think they're BS, and outright lies. But I've made it my mission to not just educate people about snus and harm reduction, but now to help people see through these lies by being educated with facts. 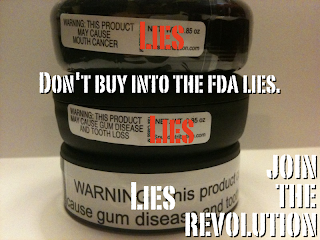 Now, each smokeless tobacco can will contain one of the following warnings. "This product is addictive", "This product can cause mouth cancer", "This product can cause gum disease", or "This product is not a safe alternative to cigarettes". While I don't agree with most of them, I do agree that it's addictive. Nicotine is just like caffeine, it's an addictive thing. Which is why we embrace harm reduction, not harm elimination. Some people, myself included, and I'd wager a large percent of the 45 Million Americans addicted to cigarettes have tried or will try to quit and will be unsuccessful. They, like me, are addicted to nicotine. Many of them, like I was last year, are looking for a way to kick cancer, but just can't kick nicotine. Snus was that door for me, and helped me quit cigarettes and restored my health back to me without a risk of cancer. Now, the FDA doesn't want you to know that, but the facts speak for themself. Dr. Karl Fagerström said, in the 60 Minutes story on snus, "Addiction is regarded as unnatural state, so addiction is a problem, but it's less of a problem than lung cancer." I agree, and it's one of the reasons I do what I do, it's why I have Snubie.com, it's why I'm so active in the world of smokeless tobacco - because I want to help people. The FDA will lie and mislead people into thinking that all tobacco is bad - after all, demonizing tobacco is part of their agenda, but the facts speak for themselves. Don't be lead into believing the lies that they are attempting to spoon feed you. Understand the truth. 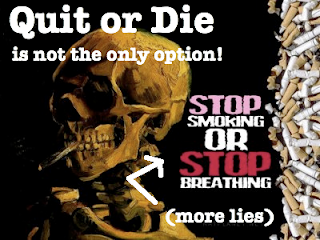 Don't buy into the FDA lies. Join the revolution. If you're a snus user/ex smoker - help to educate people around you about the lies of the FDA, and the mistruths they present to lead people away from harm reduction methods. Folks, "Quit or Die" isn't an option. We need to help people, and those who are going to try to quit smoking and fail need to know that they have options. Do the research, educate yourself and others, and help to enlighten people that there are options to help quit smoking when all else seems lost. We have health articles @ Snubie.com, also Larry Waters has several over at SnusCENTRAL.org, and Swedish Match has a big collection, as well. The FDA is attempting to demonize all forms of tobacco, including those without a cancer risk, and I refuse to let that happen. Join the revolution, and let's make sure people know the truth!
Posted by Chad Jones at 12:09 AM