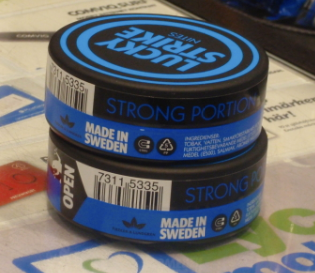 As you know, we recently had the opportunity to take a trip to Sweden, and one of the best parts about being in the snusland was being able to buy snus over the counter - especially brands like Lucky Strike and REAL Camel Snus, brands that aren't allowed to be sold into the US due to brand restrictions. Lucky Strike Nites just so happens to be one of those brands that I've been wanting to try for quite some time now, and glad to have the chance to try some while I was over in Sweden. Buying it over the counter was very exciting, I'm sure the cashier was wondering why I was so giddy about buying a can of snus. Alright, so Lucky Strike Nites is for sale over at Northerner.com and is a black portion snus that's a little bit heavier than most snuses (1.2 grams instead of the traditional 1.0 grams), and is a little bit more moist (52% moisture content) than most snuses. It's also a strong portion, which means it weighs in at 14mg of nicotine per portion, and is also a black portion. Wow, talk about a mouthful. So, we got all the specifics out of the way, let's talk a little about the snus itself. First of all, to clear up any misconception you may have heard, this is not a mint snus. That being said, let's talk Nites. 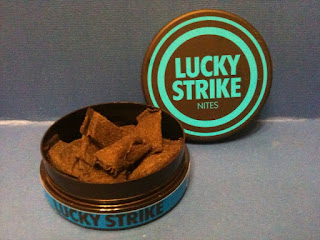 First, the aroma. When you open up the can you'll find it smells quite similar to Lucky Strike Original/White portion. Which, if you've never had, is a traditional tobacco aroma, but Nites does have a little sweetness in the aroma, which I assume may be a presence of menthol used to add the cooling sensation you get when you put it in your mouth. Yes, I did mention that I think there is some kind of menthol in there, but that does not mean it is a menthol/mint flavored snus. The portion material is black, and although the portion is more moist (52% moisture content) than most snuses, doesn't mean it has a strong or quick drip. The moisture stays in the portion very well, which I believe may be attributed to a bit thicker portion material than usual. When you put a portion of Nites in, you'll quickly notice the cooling sensation I mentioned above, which lasts for a little while and then fades. At no point in time did I experience a mint or menthol taste in Nites. I find the taste to be close to Lucky Strike Original with a bit more pepper. For those who haven't had Lucky Strike Original, it's a traditional tobacco flavor, a little smokey with a nice salt balance and a little pepper thrown in the background - just Nites has a little bit more on the pepper flavor with all the great qualities of Lucky Strike Original. The portion packs a pretty good kick, being a strong portion, and lasts quite some time. So that's Nites in a nutshell. A pretty cool new product to use from time to time, not something I'd use on a full time basis, but something I could throw into the mix when I want a little variety. 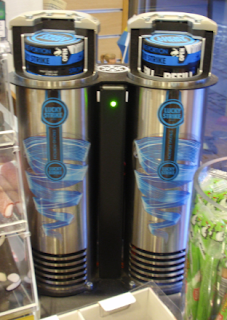 Also, I feel obliged to include this pic, because I thought it was just too cool, and wanted to share it. At a local shop in Sweden, they had this cool Lucky Strike Nites dispenser located on the front counter. The machine keeps the snus cans cool like a snus fridge would. It was a cool experience to be in Sweden and to see snus in fridges in 99% of the stores we went into, and it was definitely a joy to be able to buy Lucky Strike over the counter. Aside from General White Portion, Lucky Strike White Portion (which I'll review soon, I don't know why it's taken me so long to get one up) is one of the snuses I could use on a regular basis, a "desert island snus", if you will. But anyways, back to the topic at hand. Lucky Strike Nites. It's a cool snus, has an interesting approach, one of the coolest cans I've seen in a while, and an interesting flavor with a cooling sensation wrapped around it that doesn't taste like mint. Enjoyable, and something I can use from time to time when I want something different.
Posted by Chad Jones at 9:03 AM