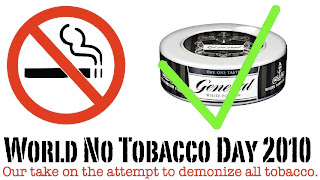 Since 1987, on the 31st of May, it's World No Tobacco Day. If you want to read about the propoganda, here's a link to the WHO article about this year's No Tobacco Day, and another link here, from the US State Department. Now, that being said, "World No Tobacco Day" is pretty much BS. It's funny how on a day like this and about the deaths and dangers associated with smoking, it's an all around attempt to demonize tobacco. Tobacco doesn't kill, but smoking does - and that's a proven fact. There are forms of tobacco that don't kill, snus included. Any article you read today is going to have phrases like "tobacco related deaths" and things of that nature in an attempt to demonize ALL forms of tobacco, which fully embraces the "Quit or Die" philosophy that is going to kill more people than it will help. 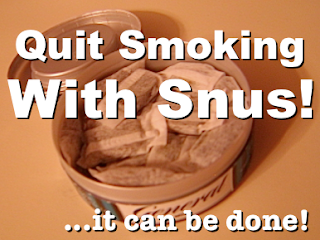 Today, I will be proudly using snus all day. Why? Because snus is a form of tobacco that doesn't cause death or cancer. On World No Tobacco Day, I'm proud to say I quit smoking a little over a year ago with a tobacco product, and today enjoy all the health benefits of being a non smoker. The attempts to demonize all forms on a day like this are among several methods used by the anti-tobacco zealots that are costing more lives than they are saving. Snus is a form of tobacco that has been studied and doesn't cause cancer or any other negative effects that smoking increases. If you want to learn more, we have a large collection of health articles at Snubie.com all about how snus is the best form of harm reduced tobacco to help people quit smoking when they just can't seem to do it by using the products pushed by Big Pharma. Don't buy into the propaganda that all tobacco kills, because it simply isn't true. You can Quit Smoking With Snus, I have and so have many other people. Today, I'm using snus all day and couldn't be more proud.
Posted by Chad Jones at 1:36 PM