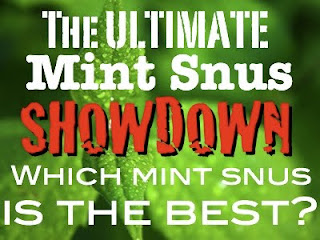 For alot of people, when you're new to Swedish Snus - you're either coming from Camel "SNUS", which has a popular mint flavor, or coming into something new and want the most approachable, familiar thing you can get your hands on - and for most of us that's mint! But, there are so many flavors, and how do you know which is the best, or even which one will work for you and what you like? I've compiled some of my reviews from the last year and my thoughts on each company's mint offering and have set up the ULTIMATE SHOWDOWN to see who shall stand, and who shall fall in the world of mint snus!

Swedish Match has a pretty small mint catalog, in fact, up until recently they only had one mint snus, General Mini Mint. By popular demand from their customer base, they expanded and released a full sized white portion General Mint. Formerly, Triumph Mint was an excellent snus produced by Lolliard in a partnership with Swedish Match, and up until the date it was discontinued, was my favorite mint snus. I just had to include it for nostalgia. Swedish Match's General Mint line is a completely different flavor from that of V2's mint. It is more of a natural flavor, like that of mint oil, and has a much different flavor. For many people who come from Camel "SNUS", Mini Mint was one of the first things a lot of us tried!
Reviews of Swedish Match mint snuses
General Mint - Link to my review.
General Mini Mint - Link to my review.
Triumph Mint (no longer in production) - Link to my review.

A relatively new snus company, GN Tobacco, in association with Gajane - makers of the wonderful Oden's snus line, released a new product called Olde Viking Spearmint. This snus was made after GN Tobacco purchased an old snus factory and inherited 50 bazillion ugly hockey puck snus cans and decided to use them. The snus? Meh. It's nothing that stands out to me. I won't get into the fermentation vs pasteurization debate over this snus, but yes it is a fermented snus, and soon GN Tobacco is supposed to release some reports about this to ease our minds.
Reviews of GN Tobacco mint snuses
Olde Viking Spearmint - Link to my review.

While Discreet Snus isn't a Swedish Snus, it is an American Snus made in the Swedish Style - pasteurization. The guy who makes Discreet - Tom O'Connell is a great guy and makes a great product. While these portions are in a mini size, I'm looking forward to him expanding to make regular size portions. Discreet is cheap to buy, it has a sweet taste, and isn't too bad!
Reviews of American Tobacco mint snuses
Discreet Cool Mint - Link to my review.

This was one of the first ones that I tried, after coming from Camel "SNUS" to Swedish Snus. Granted, it was a VAST improvement over American "SNUS", when compared to others I found it wasn't my pick of the litter. The cans that these come in are really cool, the Mocca line has a nice little metal can that all these particular branded snuses come in. Being a mini white portion, I'd suggest it to people if they want a mint snus and all they've had is Camel "SNUS", as it might be something you would enjoy!
Reviews of F&L mint snuses
Mocca Mint - Link to my review.

I didn't really like this one, the flavor came on strong, faded really quick, then got rather bland. Which sucks because I was expecting better. Rebel Tobacco makes Elixyr Energy, which is one of the ones I like the most, it's my EVERY morning snus. It helps me wake up. But this one just didn't cut the mustard when compared to the other mint flavors available.
Reviews of Rebel Tobacco mint snuses
Elixyr Peppermint - Link to my review.

For me, it comes down to two. Offroad Frosted and General Mint (Regular Size). As my Triumph Mint stash is running out, I'm having to use others to replace, and these two are doing really well. They both have a very different flavor, but are both spearmint. Offroad Frosted comes in an original portion, not too moist, but still moist enough to be an original portion. It has a great, crisp, fresh spearmint flavor, and it is a very long lasting snus. General Mint comes in a white portion, and has a great, natural mint flavor like that of mint oil, and it lasts quite a while as well. Both of these have a very pleasant after taste, a good nic hit, and overall in my mind are the king of the hill. In the end, it's up to you to decide which is your favorite - taste is in the mouth of the snusholder, but for me, it's come down to these.
Posted by Chad Jones at 5:32 PM