Swedish Snus vs American "snus": Just how different are they? 8 April 2010.

Snus. For many people, this world is a completely new concept, but for people in Sweden and a few people in the United States, this word is associated with an oral tobacco product with a rich, 200+ year history. Though this product is being toted as "new" and "revolutionary" in the United States, it's important to understand that this isn't a new product, rather it's one the Swedish have made and perfect with a true labor of love over the past 200 years to it's current form of TRUE Swedish Snus. It's important to understand there are differences between the US "snus" variety and REAL Swedish Snus. Lately, I've seen A LOT of searches leading people here with terms about Skoal "Snus", Camel "SNUS" and Marlboro "snus", and the varying flavors - Robust, Winterchill, Frost, Mellow, Peppermint, Rich, Mild, Spearmint - but it is my hope that those searching for more info about snus will find this article and learn that there is a big difference between Swedish Snus and American "snus", and that American "snus" is NOT REAL snus, nor is it revolutionary, but more of a cheap knock off of the rich history and quality of Swedish Snus. 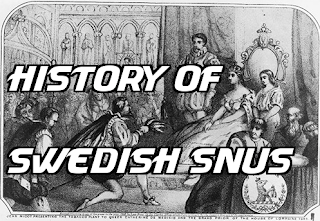 A little background on snus. In the 16th century snuff, which was a form of pulverized tobacco, was introduced to France. The story goes on to tell us that Jean Nicot, working for the French court, gave it to Catherine de' Medici for a headache. The more she used this, it become more popular among the monarchs and well to-do citizens. This photo shows Jean Nicot presenting Catherine de' Medici with the tobacco leaf. This snuff (which was inhaled), spread to Sweden in the 17th century. Later on around the 19th century, the Swedish began to develop moist snuff (which was an ORAL tobacco product used in the upper lip) and became known as snus. This is the earliest history of snus, and shows the rich history of snus, and the years that have gone into it's development to make it the refined product we know today! this video talks a lot about the history of Swedish Snus, it's very interesting and informative! 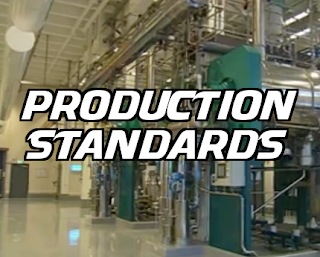 Now, just what is it that makes Swedish Snus SO different from American "snus"? One of the biggest is the fact that Swedish Snus is mandated as a food product (the "Swedish Food Act") by the FDA and produced via pasteurization to the point that the carcinogen (cancer causing agents) and TSNA levels are so low that they're virtually the same as a cup of french roast coffee.  Swedish Snus is held to the same standards that a food product in Sweden is held to. As of the date of this writing, the American FDA has imposed no production standards or mandates on American "snus", which shows that it isn't produced with the same safety or quality standards that Swedish Snus is made with. There is no standardized production method when it comes to American "snus". What's in it? Well, when it comes to Swedish Snus, it's printed RIGHT ON THE LABEL! That's reassuring, nothing to hide. They want you to know EXACTLY what you're putting in your mouth. In Camel "snus" or Marlboro "snus", we just don't know. It's not printed on the can, and they don't make it public everything that goes into their "snus". This is a neat video from Swedish Match that talks about production standards and quality, as well as this one that talks about production standards and has more info on tobacco, as well. 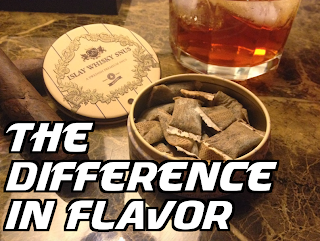 What else is a big difference? The taste! Swedish Snus products have a very high focus on taste. Many products have subtle flavors (fig, elderberries, lingonberries, mint, vanilla, pomegranate, etc) and these flavors mature with time, you don't get them all up front as you do with the sweetness of an American "snus". Snus is mixed with salt (amongst other things) which enhance the subtle flavors mixed with the tobacco. American "snus" (Camel "SNUS" specifically) uses sugar and sweetness, which is all you taste when using this product. You do not get the tobacco, or subtle flavors that go into making Swedish Snus. The flavors of Swedish Snus last much longer, sometimes up to 1.5-2 hours! With American "snus", your peak "enjoyment" period will last up to 30 minutes, but after that the flavor of snus is almost unbearable. American "snus" just doesn't seem to focus on taste like the Swedish Snus variety. 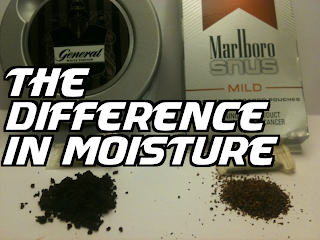 Moisture is another very important factor that goes along with snus. Marlboro Snus has between 11%-12% moisture, while Camel "SNUS" has 33%, and Swedish is between 50%-55% (from reported sources). The moisture makes a big difference in the quality of the snus, and the comfort you feel with a portion in your mouth. As you can tell from the picture, I did a comparison of Marlboro "snus" and General White Portion to show you just how much dryer American "snus" is than Swedish Snus. It looks just like the dried tobacco from a cigarette! That is not quality, folks. That's laziness. A more moist portion is going to yield the most comfort and flavor, and the lack of attention to this detail by American "snus" is one factor that truly makes it subpar when compared to the REAL deal, Swedish Snus.

Another look at the moisture differences in the various products shows you that Marlboro and Skoal are quite dry, looking almost like cigarette tobacco.  Camel is moderately moist, but General Snus comes in with the highest amount of moisture in both square can and round can products.  Click the photo to view a large quality look at the moisture comparison. 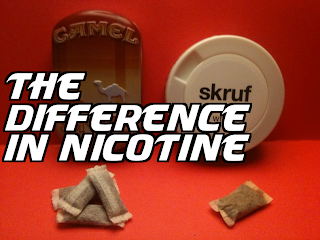 Nicotine content is one of the major factors when it comes to Swedish Snus vs American "SNUS".  For this, we have to look at two concepts - total nicotine and free nicotine.  Total nicotine is the total amount of nicotine the manufacturer lists the product as having.  Free nicotine is the amount of that nicotine that is actually usable by the blood.  For example, Camel "SNUS" is listed as having a total nicotine of 8mg/g.  But when you look at free nicotine, your body can only use about 2mg/g of that nicotine.  However, with Swedish Snus, most products range anywhere from 6mg/g to 22mg/g, and in the case of most manufacturers the total nicotine and free nicotine are very close. For example, a Swedish Match General Snus product has a total nicotine of 8mg/g, and it's free nicotine level is very, very close to that 8mg/g, around 7-8mg/g.  That's the difference with Swedish Snus and American "SNUS" when it comes to nicotine.  It's also one of the big reasons so many Swedes put down cigarettes in favor of snus.  There is enough nicotine in Swedish Snus that it can be a replacement to smoking and help you quit.  With American "SNUS", it's designed to be a supplement, the nicotine content is so low that it's not an easy product to quit smoking with.  They want you to keep buying their cigarettes and their snus - it's why their early campaigns said "When you can't smoke, snus instead." 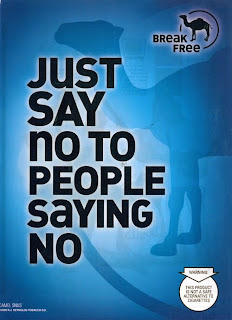 Whenever you see the Camel "SNUS" ads, they're very clearly designed to say, "Keep smoking our cigarettes, but when you can't smoke, but this other product from us." As I mentioned earlier, their product is designed to be a supplement to smoking, not a replacement. Their product is designed so poorly that it's virtually ineffective in helping people quit smoking, and they probably do that on purpose. There are very few people I've met who have quit smoking with American "SNUS"; the majority of them start there, find REAL Swedish Snus and then quit smoking. Many things contribute to Camel "SNUS" being a poor product - the lack of quality tobacco, the poor flavors that don't last very long, the extremely low nicotine content, the low moisture and the lack of value in the product. I do applaud them for doing a lot of the leg work in raising awareness of snus in the US and putting a lot of money into advertising campaigns, after all - most of us wouldn't have found Swedish Snus if it weren't for seeing a Camel "SNUS" ad or trying their product first before going online. But at the end of the day, it's nowhere near as good as REAL Swedish Snus. 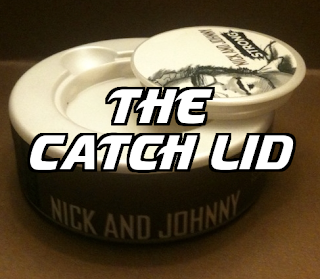 Another thing that Swedish Snus has that the American "snus"makers have overlooked is the catch lid. This may seem like such a small feature, but it's attention to detail like this that shows the mindfulness of the Swedish Snusmakers to public sanitation. This is a really good feature in the Swedish Snus cans, because if you're ever in a place that you can't discard your snus, you can just put your used portion right in the top until you can get somewhere to discard it. This prevents people from throwing spent snus portions on the ground or all over the place. This is a great feature to be included that the American "snus" cans have left out. 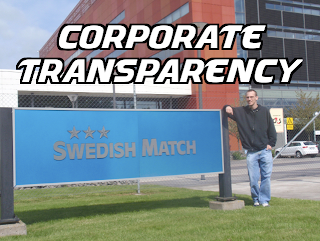 When it comes to Swedish Snus, the companies are very open about their products and methods. In fact, in 2010, I was invited to visit and tour Swedish Match's factories in Sweden. We were given all access to see how snus was made and told about the production methods and standards they use. When it comes to American "SNUS", they couldn't be more secretive. Anytime I've tried to speak with an American "snus"making company, they wouldn't disclose anything about how their snus is cured or made, or even what types of tobacco they use. With Swedish Snus manufacturers, you can email or call any of them and they're more than happy to answer your questions (within reason, of course, there are still trade secrets). Most of them even publish information on their websites about the production standards they use. Swedish Match has even made videos you can check out about their production processes, this one covers production from the seed to the can, and this one shows production of snus in their factory. 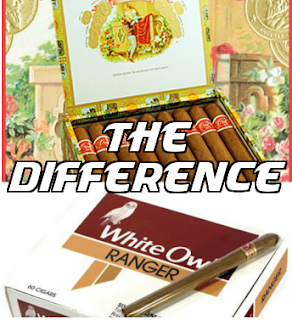 In the end, when looking over all things - price, flavor, value, quality, safety, production standards, strength, duration and history - it's clear when all the facts are presenting that American "snus" is not new or revolutionary, and is not even a quality product when compared to the superior Swedish Snus with the rich history and quality that it has. It's been said so many different ways - but the comparisons remain. It's like a Waffle House steak vs a 5 Star Restaurant steak. It's like a fine bordeaux vs a bottle of Boone's Farm. It's like a cheap White Owl cigar vs a superior Cuban cigar, such as Romeo Y Julieta. The differences speak for themselves, and in the end it is Swedish Snus that comes out on top. Do not be fooled by knockoff American "snus" products that attempt to bastardize real Swedish Snus. It's important to know there is a difference, and the difference is big.
Posted by Chad Jones at 9:26 AM