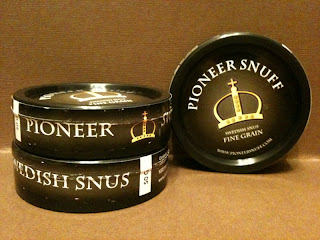 NOTE:  This product is no longer for sale online.  It may be for sale locally in Laos, but I'm not 100% sure on that.

Swedish Snus in Laos? I know, I was just as surprised as you to learn that a brand of snus called Pioneer Snuff has been in production in Laos since March, 2009. I had the opportunity to speak with Petter Svensson from Pioneer Snuff about their exciting snus produced in Laos, and I'm excited to be able to write this article about it. It truly is a unique snus, and unlike anything I've yet to experience. I'm excited to write the first review of this great new snus. 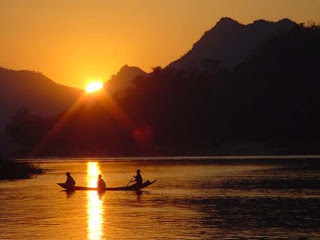 Pioneer Snuff is a classic Swedish Snus made from local Laotian tobacco. What is interesting about Pioneer Snuff is the amount of love that goes into making it, and there are very few snuses that I will say are a labor of love (the other being the Kardus snus from Swedish Match and Gellivare/Landstrom's), but you can truly tell the craftsmanship that went into making Pioneer Snuff. Petter Svensson farms and processes the tobacco himself along the Mekong River, and then grinds and dries the tobacco with the help of the 58 year old son of a local Laotian tobacco farmer. He processes roughly 50 kilos (110 pounds) every month. Currently, Pioneer Snuff is selling their flagship brand in the tourism area of Laos, but Svensson hopes to expand into Thailand soon! 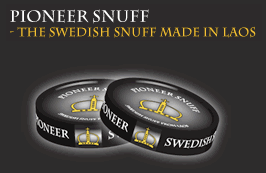 Now, about this snus. Pioneer is a very handcrafted snus. The snus is farmed and processed locally, grinded and dried by two guys, and really crafted with a "labor of love", as I mentioned above; a lot goes into making this! The snus itself is pasteurized, and as for the nicotine count - the guys at Pioneer Snuff haven't tested for that, but more on that later. But locally, it is just as accepted as some of the other big names in Swedish Snus. With Pioneer, you can really tell that this snus is a different kind of tobacco from a different climate. Swedish Snus comes from more of a temperate climate, while Laos has more of a tropical climate. That being said, this tobacco tastes different from any snus from Sweden I've tried yet. I compare the grind of this much to Goteborg's Prima Fint. It's very easy to work with, even for those new to los. I handbaked every pris I had of this, that's how easy it is to work with. 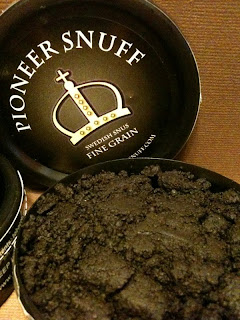 The smell is very rich, it has a deep aroma of pure dark tobacco with a little spicy hint to it. The smell jumps out and grabs you as soon as you open the can, and it's very inviting. No fancy added aromas, no undertones, just a deep tobacco smell. This snus is quite moist, but there is little to no mudslide. It stays together REALLY well in the lip. As I said above, the Pioneer snusmakers haven't tested for nicotine content, but I can say it does provide a mellow to average kick, so I'm going to guess it's on par with a regular snus nicotine content, such as General or Grov. It's not as strong as a Sterk. Now, we've covered everything except the most important part, the taste. As I said before, a lot goes into making this. Not only that, but the tobacco comes from a very different climate. Those things combined form a very rich and unique taste. It has a very pleasant salt balance to it, and a slightly spicy kick to it. All these elements blend together to craft a taste that is unlike any other snus I've yet to encounter. It's very earthy, very natural. Simple, yes. But the beauty is in it's simplicity. The tobacco flavor is quite predominant, playing heavily in the overall taste of Pioneer Snuff. The flavor isn't weak, doesn't fade, and is strong up to the 1 1/2 hour mark. It's quite simply a very natural tasting snus.

As of right now, it's not for sale at any webstores, but hopefully that will change soon and others will be able to enjoy the fine taste of this great snus!
Posted by Chad Jones at 7:10 PM