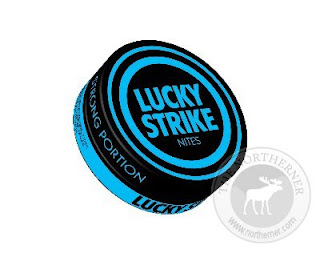 Northerner.com recently listed a new product in their Pre-Order section, a Lucky Strike Strong Portion called Nites, at 14mg of nicotine. Outside of this info, there isn't much to talk about. What is it? Well, rumors have been circulating for a while about a black portion Lucky Strike, so that's a possibility. It could be a snus that you could use at Nite. It could just be clever marketing, a catchy name, and an addition to an already cool can design. I've yet to hear any information on it outside of the fact that it is available for pre-order and will be shipping around Week 16 2010, which I believe is the week starting on 18 April 2010. I really wish we could get Lucky Strike in the US, because it's really good stuff, and I'm sure this new product will be no different. But, more information will be posted as it is made available to us! 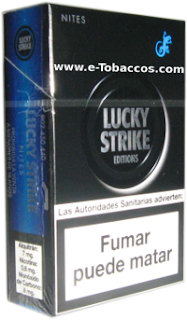 UPDATE, a little more info has come to light from a source in Spain. He told me that from 2008-2009 (or around those time periods), a Lucky Strike Collection was sold with "Lucky Strike Nites" as a release in that line. It was sold in Brazil, Chile, Spain, and Argentina. This may be something similar to Camel "SNUS" naming their snus flavors after the Camel Signature Blend cigarette line from years back. I found a pic to the left at e-tobaccos online. Rumors have been circulating that this may be a "Mint" or "Menthol" flavored release to combat the popularity of Thunder/Offroad Frosted and General Mint/Mini-Mint. That has also yet to be confirmed. Still waiting response from inside the F&L camp. I'll continue to post updates as they are sent over to us. I'm quite excited about this new product, even though I can't technically buy it here, I look forward to seeing what it's all about.

UPDATE: 26 April 2010. BuySnus.com has the full description now available! "Lucky Strike Nites Strong portion is the new snus from F&L. The blend of this snus is similar to the Lucky Strike Bold but with a cooling effect that gives the pouch a smoother feeling under your lip. The pouches are black and weights 1,2 gram/each, there is 18 of them in a can. STRONG portion.
Nicotine: 14 mg/pouch
Normal portion snus"