I've been wanting to write an article about V2 Tobacco for a while, and recently had the opportunity to speak with Patrick Vogel and get a little information on the backstory of V2. I'm really excited to share this story, as I know a lot of people have been asking for it (especially the Thunder Frosted groupies), and I'm glad to be able to report it! The Snusmen of Denmark, Mark and Patrick, have really taken a small company quite far and have kept it a small company and enjoyed great success. 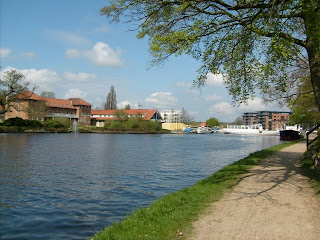 V2 Tobacco A/S was established in Silkeborg, Denmark in 2006. Silkeborg is a small city in Central Denmark with a population a little over 40,000. V2 tobacco is a steadily expanding business, and since only los snus is allowed in Denmark, the biggest part of their operation is exports to Sweden. In just a few short years, V2 has gone from zero employees to 14 employees, while every year doubling their bottom line. Over the course of four years, the Brothers Vogel invested about 3 million dollars (US) into machinery and equipment, and in 2011 the V2 operation is going to expand to a brand new factory with 25,000 square feet. From small roots to great success, the V2 story has continued to unfold before the Brothers Vogel as they have not only produced quality products, but kept in touch with their supporters and fans, listening to what they want and offering them exciting new products based on their feedback. 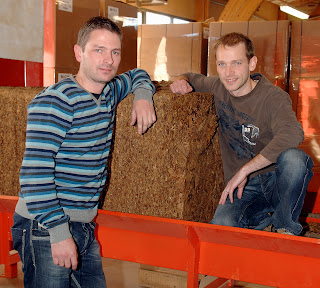 Mark Vogel graduated as a production engineer and was employed at the Orlik Tobacco Company in Holstebro producing pipe tobacco. Around the year 2000, Marc was the product manager on building a brand new snus factory for Scandinavian Tobacco Group in Malmö and stayed there for 3 years, until he returned home to Denmark. But something was missing. Marc and his "little brother" (as he is so affectionately referred to) Patrick had a deep desire to be independent. Patrick had worked previously in export sales in Europe and graduated as a Business Development Engineer. With the experience under their belts, they spent about 6 months writing up a business plan to form V2 Tobacco, and away they went! The short version of why V2 was started? "So Marc would produce snus and Patrick could sell it." as V2 remarked to me. V2's first customer ever was Northerner, who first ordered V2 products in October of 2006. Since then expansion has gone fast, not just online but in Sweden, Norway, and on into other countries, including the US!

As their knowledge has grown in the area of product development, they have spent a lot of time on improving their products. Those who first tried V2 Tobacco products in October of 2006 when they first went on sale would be surprised today! They listen to their customers and really pay attention to feedback, and develop products that they would want, but also listen to the numbers - seeing what is selling, and what isn't selling, and sort out products based on that information. The do test panels and listen to what the feedback says before releasing any particular products, all the while listening to what customers tell V2 directly they want, for example Thunder Frosted Los, which was asked for by customers and V2 then rolled out to those who wanted it! V2 has plans to replace some of the older products with new types. For example, in 2010 the "Thunder Test Series" is going to roll out with 5 different tastes, along with a competition which will send the winner (and guest) for one week to Billund, Denmark with Airfare, Hotel Accomodations, and a tour of the new V2 Snus Factory! 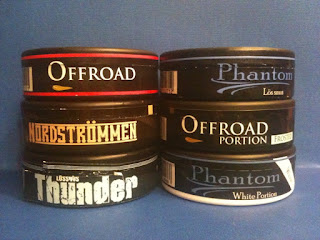 Today, V2 is looking forward to continued growth, with a great tradition and humble beginnings in 2006, to their eventual success they have enjoyed in the present day. V2 has a production philosohy and values which are focused on not just their love for snus, but also their desire to make great snus while enjoying the advantages of making it on the smaller scale, and the quality that goes along with it. With their many brands including Offroad, Phantom, Thunder, Fellinni, Nordstrommen, and BaccOff (nicotine free snus), V2 is looking forward to continuing to provide quality products to an ever growing base of snus users, while staying true to their roots and never forgetting where they came from. V2 makes 2 of my favorites - Phantom Blue (White Portion) and Offroad Frosted, so I wish them much success as they continue to grow!
Posted by Chad Jones at 9:01 AM