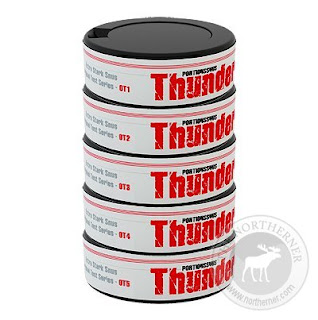 It looks like the V2 think tank is released a cool new "Test Series" snus coming up mid to late May. Kinda reminds me of the "Lab Series 0102". The "Thunder Original Test Series" is now available for preorder here, at Northerner.com. So how does it work? There's going to be a sticker on each roll with a code, you can probably vote like that, and the most votes will be the snus that is released. What's the prize? A One Week Trip for Two to Billund, Denmark. Airfare included, along with hotel accomodations at the Hotel Legoland, AND a tour of the new V2 Snus Factory that is opening in Summer of 2011. Now THAT is a contest!
Posted by Chad Jones at 6:51 PM