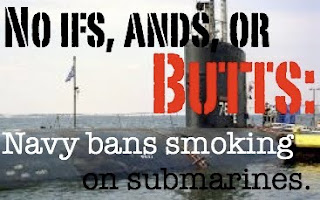 In a recent Washington Examiner article, they reported that the US Navy has banned smoking on submarines. Having never been in the Navy, I can't really say much - but I imagine these guys have it pretty rough at sea for months at a time, and their smoke breaks (which they take in a dark and cramped machine room) are the only relief these guys have. Even though I'm a former smoker and advocate for harm reduction and quitting smoking, I still think people who serve our country should not have less rights than the average citizen. If they're going to go off and fight for our freedom and the privileges we enjoy today, they should be taken care of. The last thing I want standing between me and a terrorist missile gliding through the water towards the United States is a Seaman craving his nicotine fix. 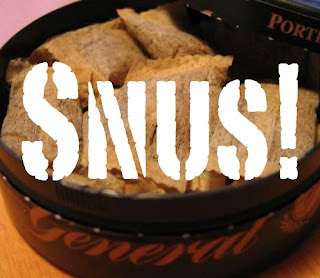 Alright, guys and gals in the Navy, I have one word for you: "SNUS!" It sucks that they took your cigs away, but there is an alternative - and a safer one at that! The smoking ban goes in around New Years, so you have a little time to adjust, and I assure you - once you switch, you'll be a much happy camper. Not just healthier from kicking the cigs, but you'll be switching to a product that's easier to use and much more discreet. So give it a go. It will be a lot easier. Plus you can enjoy your nicotine in a place other than a boiler room. And that, in my book, is a good thing.
Posted by Chad Jones at 4:36 PM