The ballad of Marlboro "snus": How to not learn from your mistakes. 7 April 2010. 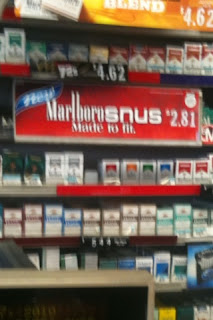 By now, many of you have seen that Marlboro "snus" is on shelves nationwide. Today was the first day I had actually seen it here locally, so I had to pick up some of each just to see what the attempted snusmaking at Phillip Morris had brought forth to us. First of all, I want to comment that the price point is absolutely ridiculous. Maybe not to people new to snus, but for those of us accustomed to [PRE-PACT] snus pricing, that probably just blew your mind. A can of Swedish Snus with 24 portions retails for 3.65 (for this particular can I randomly selected), Marlboro "snus" retails for 2.81 with 6 portions in a can. Do the math. Marlboro "snus" is roughly $0.47 per portion, while Swedish Snus is $0.15 per portion, which I assure you is worth quite more than that, while I consider Marlboro "snus" for $0.47 to be outrageous. So, as you can see from the local set up here, Marlboro "snus" is being sold right next to Marlboro smokes, with the ad "Made To Fit". C'mon, Phillip Morris, really? That's the best you could do? My previous article on Marlboro "snus" was a bit of an introduction and a review of each flavor, this will be more of a compare and contrast between the test market snus and the final product release. 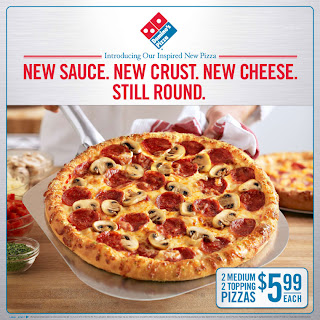 So, as we know, Marlboro "snus" recently went through a test market phase. I want to bring up a point with this. Domino's Pizza, and I know you all have seen the ads on TV, recently held focus groups about their pizza, listened to what the customers had to say, improved it with new cheese, new sauce, and new crust, and released a new, revamped product based on what the customers had to say and the feedback they provided. Domino's new pizza is excellent (I'm a pizza fan, I assure you I wasn't paid to say this) and it's the result of a properly executed testing and development process. That improved product is a perfect example of how the test market and research phase is supposed to go. You take the original product, listen to what the customer had to say, and improve on it. 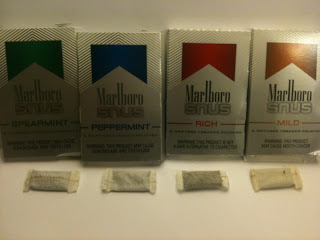 Phillip Morris did not follow in the footsteps of Domino's Pizza. Phillip Morris test marketed "snus", received feedback, and released the EXACT same product that they had test marketed with a few examples I will note in this article. As you can see from the picture, the same packaging, the same portion size, and the same dry, construction paper material. The ONLY difference I noticed is that the Rich variety is a little more moist, but not much. You can tell by the darkened portion material. But, everything else is just as dry as it was before. Marlboro Snus has between 11%-12% moisture, while Camel "SNUS" has 33%, and Swedish is between 50%-55% (from reported sources). The nicotine content I believe is the same as was reported in my previous article about Marlboro "snus", 7.61mg for Rich, 6.33mg for Mild, 6.45mg for Peppermint, and 6.45 for Spearmint. Camel "SNUS" (American) is listed as having 8mg. The TSNA levels are between 1.0 and 1.3. Also, the flavors are the exact same, no changes made to that, which is sad, because you'd figure they would want to improve to make a product that could compete with other snus. It's bad to be able to say this, but Camel "snus" is still better than Marlboro "snus". Another thing to note is that the mint flavors (Spearmint and Peppermint) have an open top of the little box, while Rich and Mild are closed. Not sure what that means. 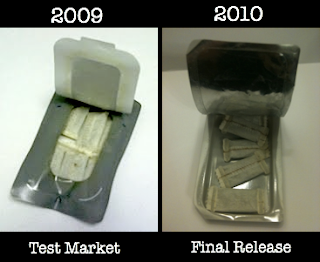 Ok, so what DID change? Other than Rich being a little more moist (which may be due to production inconsistencies, not sure), the packaging. The original package had a little hole and the packaging closed over that little hole. Now, the whole package is sealed and when you open it, it opens up the whole package to you. Not sure why the change with this, but that's a noticable difference. Same flavor, same moisture content, same quality, same ol', same ol'. As mentioned earlier, as evident in Domino's Pizza test market, you would figure that a company as big as Phillip Morris would release a bombshell snus product to compete with RJ Reynolds' Camel "snus", but sadly that isn't the case. Marlboro "snus" was rushed to the market as soon as the PACT Act (literally, the day of) passed. Ironic? Don't you think? It's a little too ironic. 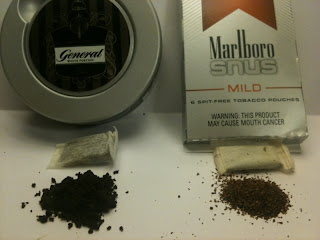 Last, but not least, my favorite part of comparing Marlboro "snus" and REAL Swedish Snus. The cut test. I cut open a General White Portion (left) and a Marlboro "snus" portion, right. The results speak clearly. As you can tell, the Marlboro "snus" is nothing more than cigarette tobacco, dry as can be, put in a construction paper portion and packaged and sold as "snus". I consider that an insult to real Swedish Snus. If you look to the left, you will see how snus is supposed to look! Moist and fresh - produced with the quality that many of us snusers have come to appreciate when it comes to snus. Since my last article reviewing Marlboro "snus", it hasn't changed. It's still a terrible American snus product, and in no way compares to the rich tradition, history, production standards, or quality of REAL Swedish Snus. Don't be fooled by imitators. Marlboro "snus" is NOT real snus.
Posted by Chad Jones at 7:13 PM