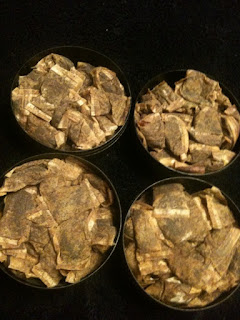 Well, after days of going through the at home snus production process, I finally have a complete, first batch. Coffee Vanilla, Whiskey, Vanilla Cola, and Coffee. The portions turned out very moist, and I'm very impressed with the results! They turned out quite well.

Coffee Vanilla. The aroma of vanilla was the first to come through (remember, these ingredients were mixed in equal parts), then a smooth aroma of dark coffee underneath. The aroma is much different from that of the Offroad Coffee/Vanilla that I have had in the past. The portions turned out very moist, but not dripping, but with a good moisture content. And after mixing for several days, the moisture softened up the portions quite a bit, so the mouth feel is top notch. The taste of this is much different from the Coffee Vanilla I remember from last year, and this years batch. Not sure if it was my particular mix, or if these are different flavors, but the taste is a perfect blend of coffee and vanilla and does not taste near as artificial as I observed from the Coffee Vanilla I've had in the past. The vanilla flavor is more predominant than the coffee flavor, though they were mixed equally, which is good, in my opinion, because I'm not that big of a coffee fan, but it turned out quite well.

Vanilla Cola. Ah, this is the one I have anticipated the most. The smell was a very pleasant, sweet smell of cola with a mild undertone of vanilla. Very smooth, very mellow. I'm not into flavored snus too much anymore - except for on occasion, but my, oh my. This is wonderful. A very moist, and soft portion with a great mouthfeel and a great flavor greeted me almost immediately after putting this in my lip. The flavor of cola comes through at first, slightly sweet and not too strong, and then a mellow mixture of vanilla mingles in with the cola flavor and provides a really wonderful flavor. This was an excellent mix, and my favorite of the four that I had mixed up.

Whiskey. This is one I was quite nervous to try. After trying Offroad Moonshine it made me wary of V2 and alcohol flavoring. Regardless, I wanted to give this one a fair shake. I don't drink hard liquor, in fact - I rarely drink, and if/when I do, it's usually wine. So this wasn't one I enjoyed. But I can say the aroma and flavor taste alot like alcohol - but not nasty morning after alcohol like with the Offroad Moonshine alcohol. I figure if you're into that kinda thing, you might actually enjoy it, but this wasn't very pleasant for me.

Coffee. Why not? I mixed up a Coffee Vanilla and a Vanilla Cola. I'm not a big coffee fan, but I can appreciate the flavor and aroma of an occasional coffee. The aroma of this one was a dark, rich coffee roast flavor. Not too artificial, but just mellow and average, nothing too crazy. Just a mild coffee aroma. The portions were moist and very comfortable in the lip. The flavor came on pretty quick, and tasted much like a pure coffee - without cream and sugar. Which is the part of coffee I can appreciate when I enjoy it, a smooth black roast without all the extra stuff added to it. It wasn't too bad.

So that's my first batch of SnusX. I was quite impressed with the accuracy of these flavors, the mixture quantities, and how easy it was to make my own snus. The Vanilla Cola and the Coffee Vanilla were the all stars of the batch, with the Vanilla Cola being the best of the 4.
Posted by Chad Jones at 6:40 PM