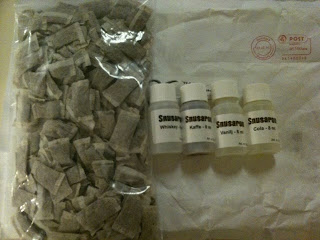 DAY 1: V2 Snus Kit. 2 March 2010. This is something I've been really looking forward to trying. The SnusKit from V2, SnusX. A make your own snus kit, what could be more cool than that? Before I began mixing anything, I wanted to take the snus itself for a test drive, so I went for a portion just to see what it was all about. This is a really exciting concept, because for so long now people have wanted a way to make their own snus, and now it's possible! Thank you, V2, for making our mad scientist dreams come true. 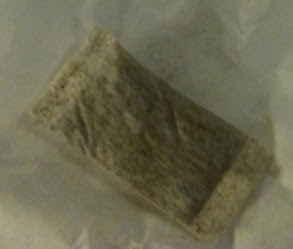 The portions themselves are very dry, so even if you like white portions, I'd suggest adding a little water to these. They suggest distilled water (which is what I used), because tap water may contain chemicals and flouride. The aroma and flavor are very simple, pure tobacco flavor. Very little to no salt taste, I'm not sure if it's even in there. The portions pack the kick of a regular portion, so I'm guessing 8-10mg of nicotine in each one. The flavor is actually pretty good, even for a plain, unflavored snus - so I can imagine the flavors will be much better after having the additives put in and sitting for 3 days. 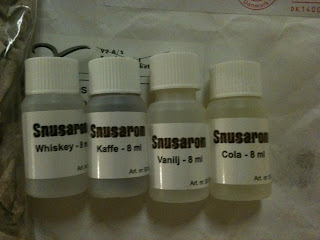 The flavors I received in the test kit were Coffee, Vanilla, Cola, and Whiskey. Each one smelling just like the name on the bottle, the whiskey being the strongest. The suggested mix (if you're making original portions, which is what I'm making for my first batch) is 8ml-10ml of water (1.67-2.02 TSP). I had to do a little math for the flavors, they list it per bucket - I'm making cans, so the flavors came out to 1.47ml of flavor per can (0.29 tsp). So that's a little run down of the mix. This is the suggested amount, so we will see how strong or pronounced the flavors are in a few days, and when we start the second batch we'll know if they need to be changed or modified - but this would be perfect for those who want a lighter flavor in their snus, or a stronger flavor. 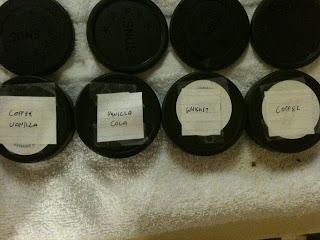 In this first batch, I decided to go with the following flavors. Coffee Vanilla, Vanilla Cola, Whiskey, and Coffee (simple). Cans are not included in this kit, so if you save your old snus cans, I simply peeled the labels off and thoroughly washed them so as to avoid flavor mixing. On the bottom of each one I attached a label so I would know what I was working with. I am really excited about the Vanilla Cola. This is one I mix when I do nasal snuff, so to have this in a snus is going to be really good. And the Coffee Vanilla - we'll see how closely it tastes to the Offroad Coffee/Vanilla. 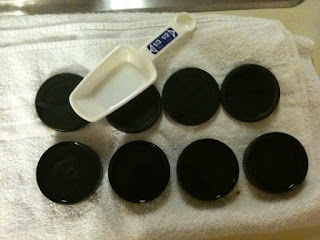 To begin, I added 2.02 TSP of water to each can. Then the flavor, 0.29 TSP or 0.149 and 0.149 if I was doing a mix. Added the portions, shook well, and then mixed the portions up by hand to ensure proper mix. I didn't have a dropper so I had to do most of this by visualizing with a TSP cup, which I'm sure I was quite accurate on. As a former chef, I'm very good with measurements. Anyone who is going to be using this kit who isn't good with measurements, I would suggest getting a dropper. I'll be investing in one for my next batch. 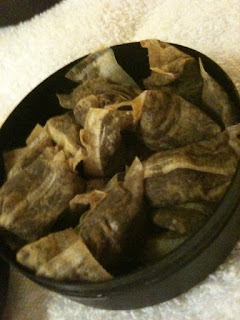 The portions look very good after being mixed up, very moist, it will be interesting to see how they look after 3 days and everything soaks in. I wonder if this is close to the same process V2 uses when they make their own snus? Add flavor, soak for 3 days before it is ready to be sold? Or if this is just for this particular snus. I've been curious the whole time I've been doing this if these are just suggestions for this particular snus kit, or if this measurements are the actual units V2 uses when they make their snus - Thunder, Offroad, Phantom, etc. As I said above, it will be interesting to compare my Coffee Vanilla to Offroad Coffee Vanilla and see how close they taste, and if these are the flavor additives V2 uses in their tobacco products, or these are completely new ones designed just for this product, SnusX. 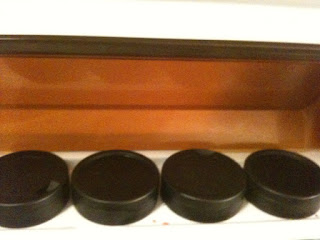 From there, put directly into cold storage (not froze) where they will remain for 3 days, marinating the snus goodness! In 3 days, I will have homemade snus. This is actually really cool, I felt like a mad scientist as I was making my own snus, and I look forward to seeing how these turn out. I am refrigerating these and not freezing them, I would like to note. They say refrigerate 3 days on the instructions, as well, so I will be following this to the letter. I will be reporting back with progress as the days go by, to see how the aromas develop, and on Day 3 how the flavor is!
Posted by Chad Jones at 4:04 PM