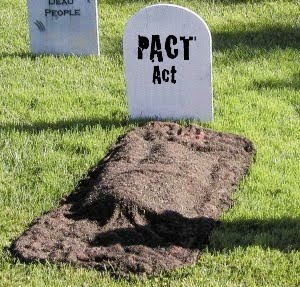 Though I don't agree with their wording in this article about the people who use mail order for tobacco purposes (teenagers, adults evading sales tax, and the Seneca Nation of Indians of Western NY....what about Swedish Snus users?), I was glad to see this article tonight. From the NY Times. This law that seemed oh so certain to be passed looks about dead in the water to me. At the last minute, apparently, a few Democratic senators were planning to block the bill (whoever you are, THANK YOU.), and the Senecas were not quite about the consequences of this bill. They warned that this ban could cost 1,000 jobs in the cigarette business, and even put up a billboard along a highway in NY, "Don't let PACT Act destroy western New York's economy." This may not officially be the end, as they may attach something like this to another bill, but it would only ban cigarette shipments. So it looks as though for now, mail order snus is safe! I've put alot of worrying into this myself, but I'm glad to see that there are those who would fight for this, and that snus will still be able to be sent through the mail. If you could see my smile tonight, I tell you, this was amongst the greatest news I received all night.
Posted by Chad Jones at 10:34 PM