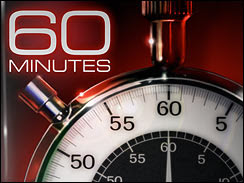 UPDATE: 60 Minutes has confirmed it is airing Sunday night. Catch the preview here. // Alright everyone, make sure you're home Sunday April 4th at 6:00 PM CST/7:00 PM EST, or you have the Tivo-Machine cranked up, because 60 Minutes is going to be doing a story about smokeless tobacco products in the US. It has not been officially confirmed or finalized yet, but if the story will make it to air on Sunday they will have it on their website with a teaser tommorow (1 April 2010) to announce it. This story will focus mostly on the new Camel products - Orbs, Strips, and Snus. Swedish Snus may be a part of the show, and I'm not sure how much they will speak about it in the show, but I'm hoping it has a significant part in this broadcast. Sources say they were in Sweden for part of the research into this story - and I'm not sure who they spoke with or met there, so it will be interesting to see what they have to say about Swedish Snus. I'm hoping they do have some good things to say about REAL snus. So guys, skip "America's Funniest Home Videos", and the other 'exciting' programs on Sunday night and tune in to 60 Minutes on CBS.
Posted by Chad Jones at 8:37 AM