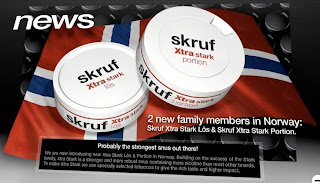 "Probably the strongest snus out there!" says Skruf about their new "skruf Xtra stark portion" snus. Released in Norway as Los and Portion, it is listed as "...a stronger and more robust snus containing more nicotine than most other brands." They go on to say, "....we use specially selected tobaccos to give the rich taste and higher impact." So the flavor, I'm assuming, will more than likely be close to the same. 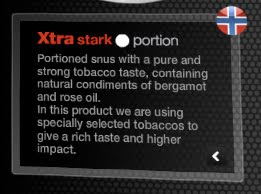 The portion is listed as "...a pure and strong tobacco taste, containing natural condiments of bergamot and rose oil. In this product we are using specially selected tobaccos to give a rich taste and higher impact." (Skruf.se). With Thunder Frosted weighing in at 16mg of nicotine, General ES at 15mg of nicotine, and Oden's at 17mg nicotine, I'm predicting Skruf Xtra Stark to weigh in at around 19mg of nicotine, although I've yet to have an official confirmation about this. For those of you who want to be kicked in the face with a massive nicotine hit, this may sound like it's right up your alley!

Only time will tell! More info will come as it's released.

Update. 5 February 2010.
Currently, all that has been released is original portion and los. These products will be available online for other markets in "the near future". There are no plans for a white portion at this time. Also, apparently, they are "not allowed" to communicate the exact nicotine level, but the Xtra Stark is around 20%-30% stronger than Stark, and the nicotine level can "differ between cans", which by my math would put the nicotine content between 16.8mg to 18.2mg. So, on the upper end of nicotine "potential", that would make it the strongest snus on the market, on the lower end, it's still hovering in Oden's area at around 17mg. Definitely going to pack a kick!