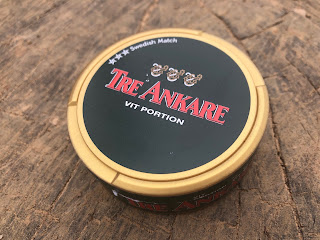 Tre Ankare is an interesting snus.  First, it's one of the most underrated products on the market and one that doesn't get discussed nearly enough.  And second, when it launched in 1977 it was the first portion snus ever released.  So, if you love portion snus, you have Tre Ankare to thank for that!  Tre Ankare, for me, has been an occasional snus since I started in 2009.  It's not something I use all the time, but it is something I like to use here and there!  The flavor description for Tre Ankare says it has "a strong tobacco character with clear elements of smoke, cedar and dried herbs."  It comes in a 21.6 gram can with 24 portions for 0.9 gram portions.  The nicotine content is 8mg/g (0.8%), which breaks down to 7.2mg/portion. 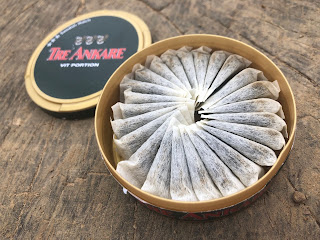 When you open a can of Tre Ankare, the aroma is a mellow tobacco smell with a little sweetness and a touch of herbs. The portions are in the star formation format, so I suggest fluffing them to make them more comfortable in the lip! The flavor of this snus is very tobacco centric, but it seems to be in the middle between mellow/earthy and robust/bold. It is a darker tobacco flavor than Ettan, but in a more mild presence. There is a a little smokiness, and a light herbal hint in the background. It's quite good! The nicotine strength feels to be about the regular strength level, and the flavor lasts up to an hour on average.  As I mentioned earlier, Tre Ankare is incredibly underrated.  It's a great tasting product, and one I definitely suggest trying if you like tobacco-centric flavors!
Posted by Chad Jones at 5:04 PM