This was one that I've been really hesitant to review. For a few reasons. The return of the hockey puck snus can, which universally signifies bad snus. I can understand Gajane/GN Tobacco buying a factory and having a bazillion of these sitting around and wanting to use them, but I'm hoping that after they're gone they come out with something good looking like the cool design on Oden's. Something similar in a Viking-esque fashion. The other reason being that this snus is fermented, and that just doesn't appeal to me. All the Swedish Snus I love is pasteurized, and everytime I hear "fermented" associated with "tobacco", it's never in a positive way. So that got me a little hesitant, but apparently the way it's done with this snus is okay, because it still has to meet Swedish Food Standards to be sold, so I can't complain or say it's going to kill me. (not that I thought that, but y'know....). The preview for Olde Viking is here, and a little more info is there, if you so desire. 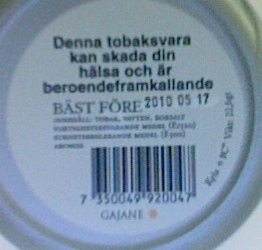 Now, a little about this snus. One of the first things I was looking for when I bought this, was to see if a GN Tobacco logo would be on the back, or Gajane. Turn the can over - Gajane logo. I was figuring GN Tobacco would have a logo specifically for the Olde Viking line, but maybe that's with the next round. The next thing was, "Can you judge a book by it's cover?" So much bad mojo is associated with the ugly hockey puck snus can, I had to see if this was going to be the worst snus I have ever tasted. I had to see if Gajane had translated the sheer awesomeness of Oden's to this new brand, Olde Viking. 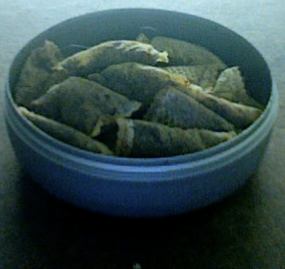 After opening up the can, a very familiar smell hit me. I wasn't sure if it was true, because I heard 2 other people say this about this brand now, and I didn't want to fall in line. I didn't want to believe it! I went to the bathroom, grabbed a comparison product, and sure enough, the smell was dead on, accurate. And what was that familiar smell, you may ask? Toothpaste. It smelled like my Mint Colgate toothpaste. Which is okay, I like the smell of toothpaste, but not in a snus. I mean, c'mon. Really? Next step - in the lip. This is where Olde Viking will get the only praise I am going to issue. This snus portion is by far the most comfortable snus portion I have EVER put in my mouth, and that's saying alot because I've tried about everything. It's the most soft, pillowy portion that I believe I will ever encounter, because I honestly can't imagine anything more comfortable than this. The flavor? Well, it's minty, and actually kinda tastes like a minty toothpaste, really artificial flavor, doesn't last very long, burns out rather quick into a funky aftertaste. Decent nic hit, nothing major. It's got a burn though, and that's a significant part of this snus. A little burn in the lip, and some burn in the throat too. Not like, fiery intense burn or anything, but it's moderate and noticable.

To sum it all up, it wasn't as terrible as I thought it was going to be. But it wasn't that great either. With other better tasting mint snus such as Thunder Frosted, Offroad Frosted, and the new larger portion of General Mini Mint coming soon, this isn't going to make it on a reorder list for me. It wasn't the worst thing I've ever had (the American mint "SNUS" is much worse....) but it wasn't good enough to warrant me wanting more than the half a can I went through to get a good feel for it. That was enough for me.
Posted by Chad Jones at 8:56 PM