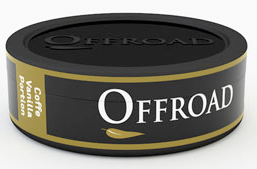 Offroad Coffee Vanilla wins the award for snus I wanted to like most. I mean, how could you go wrong? A coffee vanilla flavored snus, and not just that - one that had been retired and brought back by V2 for it's adoring fans and the generation that missed out? And by generation, I mean those in the 7 or 8 month gap since it went off the market. Well, I'm sad to say, I didn't enjoy this one. I wanted to, but it just didn't happen for me.

A little info on how this product release came to be. A friend on SnusOn is a HUGE Offroad C/V fan. Seriously. Has rolls and rolls of the stuff. A little poll ensued to bring it back, and had 56 people express interest. Well, V2 being one of the companies that cares most about what people think said, "Okay, let's make it happen." So they released a limited amount to Northerner.com and the rest is history. V2 did the same when people were calling for Thunder Frosted Los. They listen to what the people want.

The last round of Offroad C/V I tried early last year, I didn't enjoy. I found the flavor to be very artificial and lacking. I didn't review it at the time, because it was on the tail end of it's product life and I didn't have enough time with it or more than a few cans to actually get a good idea about it. There is a coffee flavor, and a very sweet vanilla flavor. That much hasn't changed. But, there is a little bit more bitterness to this one that is an underlying tone to the coffee/vanilla flavor, which sad to say stays around for a little while. The portions, being original portions are moist, and very soft with great mouthfeel, but they feel lacking. This may have been due to the fact that V2 only made a limited amount and stretched it as far as they could.

So Offroad Coffee Vanilla 2010 was a bust for me. I really wanted to like this one this time around, but it just didn't happen for me. The flavors tasted very artificial just like the last batch, and I couldn't get into it.
Posted by Chad Jones at 6:34 AM