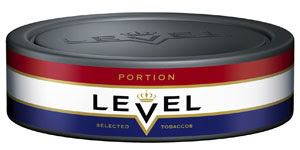 After hearing about this for so long, the first time I got to try it was in a snus box pass dubbed "The Box Pass From Hell". Going into it, I didn't expect much from it. I figured it would be an average, low grade snus. I was 4th in line, so by the time the box got to me it had been passed around a bit and I'm sure it wasn't going to be as fresh as usual, but I was moderately sure I would get a good idea for what Level truly was.

If you look at the BuySnus description of Level, it's about as simple sounding as can be. "A fresh mix of tobacco, citrus and bergamot." Northerner describes it as "...a traditional tobacco flavour, with elements of citrus and bergamot. " But that can be used to describe all "non-flavored" snus. After a terrible first impression with the box pass from hell (and all the jokes that ensued), I figured it was time to give it another try, a real shot.

Level (as well as LD - which coincidentally is a snus I like), are made by the Gallaher company, which is owned by JTI now, which is the world's third largest tobacco company. Both are marketed as value priced snus, and rightly so, they are both available at an affordable price tag. I recently had a can come in so I could give it a fair shake, a real shot. The first can I tried had been in a box pass for a few weeks, so I was sure it wasn't at it's true potential. This can was sent directly to me from the factory, fresh as can be, and ready to go.

When I opened up the can, there was a strong aroma of citrus that immediately erupted from the can. It was much stronger than most other "non-flavored" snuses that I've had in the past. The portion didn't taste as bad as the last time I tried Level, I was able to pick up the actual taste of Level snus a little better than the can I had in the box pass. The tobacco flavor is very mild and subdued, the citrus notes are very strong, mild peppery balance in the background, and of course a salt overtone. Is Level that bad? Well, it's not that good. It's tolerable, and as a value priced snus it's decent. But it's not something I would actively go out and seek. If it were one of the only snuses on the market, I could imagine I would use it from time to time. It's not the best snus I've ever had, but it's certainly not the worst. If I had to give an honest opinion of Level I would describe it as average.
Posted by Chad Jones at 11:31 AM