Chaini Khaini is finally here! I must admit, I've been quite excited about this since I heard in September that Harsh International was bringing India's most popular snus line to the Swedish Market, and being distributed by Swedish Match. I'm a big fan of Indian food, and the flavors and essences that make it so great, so I knew that bringing this into the tobacco world would be a very unique and exciting thing. 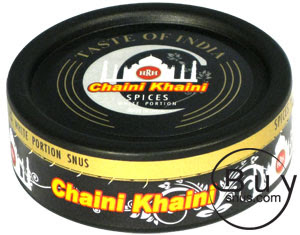 I spent the most time with Chaini Khaini Spice. This was my favorite of the batch. Upon opening the can, the aroma is similar to Tiger Balm (don't let that scare you off), it's the more pleasant aromas of Tiger Balm such as Menthol and Camphor. It's very unique, but very good. I actually went to pick up Tiger Balm after I heard someone say that was what the smell reminded them of, because originally I was thinking Vicks....but after smelling Tiger Balm (and, coincidentally, enjoying it), I found it to be very similiar. After putting in a portion, almost immediately (every time, I should note), a slight tingle comes on from the mint, and a spicy flavor. Cardamom is very recognizable, as well as a pleasant mingling of ginger and subtle hints of parsley (which I could pick up easily, I put parsley in EVERYTHING and greatly enjoy it, so it was good to see this flavor was recognizable) in the background, not too strong, but present with the other flavors. These flavors blend very well together in a pleasant, flavorful experience. At no point during this snus did I pick up any strong tobacco flavors, it was more like an afterthought. The flavor stays strong for about an hour, but after that it becomes a bit "too much" for me, and I have to take it out. But that hour is the most unique experience I've ever had with a snus. The aftertaste is very interesting as well, quite good! 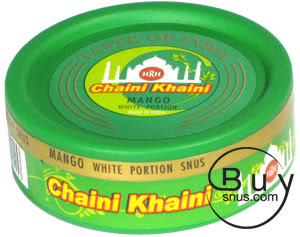 The Chaini Khaini Mango begins with the same aroma as the Spice, reminiscent of Tiger Balm, but with a slightly sweet aroma laying over the top of the Camphor scent. The flavor comes on immediately with a tingly feeling and a minty flavor, before an artificial fruit flavor comes in that tastes slightly similar to Mango, however I will go on record as saying the Offroad Mango tastes alot more natural. That doesn't mean this snus is bad - it just means the approach is different. This snus has a spicy flavor, with a sweet fruit flavor (kinda like mango, but not really) wrapped around a mint flavor. Again, no tobacco flavors, maybe as an afterthought, but not something that you could easily detect unless you were really picking through the flavors of Chaini Khaini Mango to find it. The flavors good for about 45 minutes to an hour, but after that becomes a bit TOO much and I have to take the portion out.

So, what's the bottom line? Chaini Khaini is a very interesting new snus line. For so long, V2 has been the only company with interesting flavors, followed by Swedish Match and their Catch Collection line so it's a good thing to see new flavors being brought to the market. The flavors in both of these are unique and interesting, and although not something I'd use regularly, it is an interesting go-to when I want something different.

NOTE: This product is one that is currently not available from Northerner.com. If you'd like to enjoy this snus, we suggest buying it from our friends at BuySnus.com.
Posted by Chad Jones at 6:41 PM