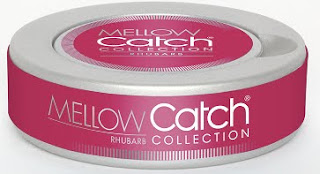 Days after new information was coming forward about new snus products for 2010, we received more exciting news. The popular Catch Collection by Swedish Match is returning for 2010. Last year, we received 4 quarterly products under the Catch name - Mint Vanilla, Peppermint, Violet, and Cardamom/Cinnamon, all of which were great products and received very well by snus users. The tradition continues this year starting with Catch Collection//Mellow Rhubarb. The flavor is listed as, "Mild tobacco flavour with well-defined notes of rhubarb and ginger and a hint of spicy undertones." Sounds exciting. I'm a Southern Boy, so I love Rhubarb Pie. So I'm really excited about this release. The scheduled release date for this is 1 Feb 2010.

Curious about what's next? Well, we have some more info about the rest of the line coming soon. After this one will come Catch Collection//Glow (Lime/Fläder) also described as "elder lime", Catch Collection//Ease (Ginger/Orange), and the fourth flavor has yet to be announced. These will once again be in white mini portion form due to the research done, so although I was hoping for a full sized portion, we'll have to hold off for that and hope for 2011!
Posted by Chad Jones at 7:54 AM