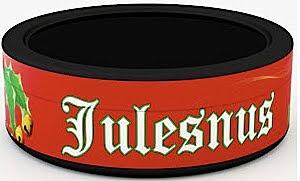 After a successful test of Gotland's Julesnus a few weeks ago, going into the Christmas season I find myself quite excited about new releases. Being a former smoker, this is a whole new world for me. Phillip Morris never released Julesmoke, so it's exciting to see two companies releasing snus flavored just for the holiday season. Being a 2009 snus user, I didn't get in on the 2008 batch, so i can't make comparisons, although I can say that V2 has told us this years release has a different flavor from last years.

That being said, I greatly enjoyed V2's Julesnus. Released under the Nordströmmen line, Julesnus comes in portion and in los. As of this writing, all I have tried is portion, but of the portions I've gone through so far, I find myself unable to take this one out of my mouth! I've chainsnused it almost all day, which I didn't find myself doing with the Gotland's. Many people have said they preferred the Gotland's to the V2 variety last year, and in the past I've heard people say they prefer Skruf Cranberry to Offroad Cranberry, so not much love coming to V2, but I would like to stand up and say, this one has my vote for best Julesnus of the 2009 season. Granted, I did enjoy the Gotland's Julesnus. But, if I had to pick one, I would have to say V2's Julesnus would come out on top. In my opinion. 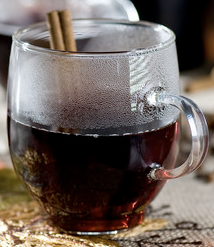 The listed flavor profile for Julesnus is Glögg, Cinnamon, and Clove. For those who don't know, Glögg is basically mulled wine, most often found in the red variety, and seasoned with various spices and served warm around the holiday season. It is sometimes flavored with cinnamon, clove, vanilla, sugar, and various other flavors. After trying this portion, I found myself wanting to try Glögg, so I called in a favor from a friend down the street who is into all kinds of interest varieties of wine and warm beverages, my "art buddy", who whipped some up and brought it over, and I found the characteristics of Julesnus strikingly similar to those of Glögg.

So, about this snus. Upon opening the can you're greeting with an immediate, smooth aroma of cinnamon with slight hints of clove. The smell isn't strong or overbearing, but is so pleasant that I found myself barely being able to take my nose away from the can. The flavor comes on immediately with a burst of cinnamon, and gentle hints of clove mellowing in the background. As the flavor matures, the cinnamon and clove balance completely until both flavors mingle on your palette in equal parts, providing an amazing flavor of Christmas. The flavor stays strong for about an hour until it mellows out and fades away. 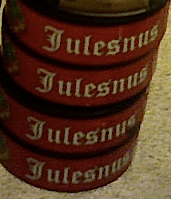 Now, after several portions of this throughout the day, I can honestly say that this is my preferred Christmas snus. Being a fan of clove, I can also say I can reach for this one when I want my clove fix. I have been enjoying the Offroad Limited Sweet Clove, and after trying this it has really dawned on me that V2 knows how to flavor a snus with clove. I will definitely be ordering more of this one, because I've yet to find a snus with a flavor like this. It looks like I may do a little stocking up on the amazing V2 Julesnus.

Also, for those following my blog, I know that the Kardus Review Pt 2 should have came next, but it's taking a little longer than expected. But it will be up soon!
Posted by Chad Jones at 12:35 PM