Petition for S 1147 - PACT Act to EXCLUDE Swedish Snus. The time to act is now!

Snus users alike, would like to continue being able to purchase our snus over the Internet, via phone, etc, and having it shipped to us in the mail. PACT's purpose, as stated in the bill, is "To prevent tobacco smuggling, to ensure the collection of all tobacco taxes, and for other purposes." Now, that may sound good on paper, along with all the other terms thrown in there, "terrorism", "for the children", etc....but how will this affect snus users?

First of all, PACT can do some good. Stopping smuggling of cigarettes and taking extra steps and measures to ensure this couldn't hurt. I can't rule out that smuggling tobacco does occur, Andrew Romeo did a great article about it recently at SnusCENTRAL - Link to Andrew Romeo's Article. But, it is the opinion of the snus community that this bill should EXCLUDE Swedish Snus. There are legitimate businesses online - Northerner, BuySnus, GetSnus, SnusCENTRAL, SnusWorldWide, SnusJet, ClubSnus, I could go on and on, that are definitely NOT terrorists, and are contributing to the delivery of a harm reduced tobacco product that has helped MANY people (myself included) quit smoking....people with a 2-20 year habit, some even more! If extra measures must be enacted, including age verification or other forms, that's fine. But PACT cannot go through in it's current form, it's too flawed.

In an article published in The Lancet, Dr. Jonathan Foulds of the University of Medicine and Dentistry of New Jersey and Dr. Lynn Kozlowski with the University of Buffalo said, "We should not delay in allowing snus to compete with cigarettes for market share." In an article published in USA Today, Dr. Peter Hajek - professor of clinical psychology at Queen Mary University Hospital stated, "For a smoker, quitting all tobacco use is best, but failing that, switching to snus is a good idea." Dr. Brad Rodu from the Tobacco Truth Blog said, "Our research has documented that smokeless tobacco use carries only two percent of the risk of cigarette smoking."

Snus is most commonly available online. Taking this away from people would take away the only chance of quitting smoking some people would have. I tried the patch, medicine, gum, everything. As soon as I tried snus, I quit smoking, and haven't looked back. Taking away snus would take away the hope that some people could quit smoking. Taking away the ability and option to buy snus online is NOT good public health policy, and would NOT contribute to a better public health system. As Andrew Romeo has said before, "Look at Sweden!" Lowest cancer rates in the world, and the lowest rates of smoking, last figures are close to 20% or less. 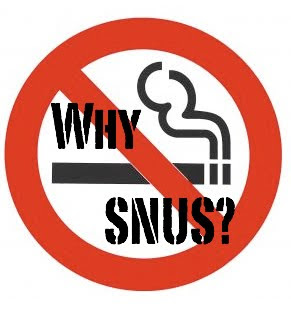 Snus has a very small amount, miniscule in comparison to cigarettes, of TSNA's. The EU mentality of "Quit or Die" is not the best approach. Doctors themselves are saying we should embrace snus as an option for quitting cigarettes. If other means do not work - we shouldn't rule out this one. Snus is mandated as a food product by the FDA in Sweden, which means it is held to the highest standard of quality. Many companies have adopted their own standards of quality, including Swedish Match's GothiaTek standards. Companies in America (as of date of publication of this article) won't tell you what's in their products, much less how they're made. Snus prints it right on the label! Further information is available online, as well, to further inform you of the ingredients of snus.

What can you do to stop this? Well, be active. There is a petition online, it would help to sign the petition at The Petition Site. Another option is to write your senators, addresses available here. Place a phone call, send an email, write a letter, let them know what snus has done for you, and in the interest of public health, allow snus to continue to be ordered online, over the phone, and shipped via the mail. The facts speak for themselves. Snus IS harm reduced tobacco. Snus DOES help people quit smoking. When all other options fail, we should continue to allow the one that DOES work to be a solution to people.

I, in good conscience, cannot approve of PACT passing right now in its current form. But I'm not a senator. I am, however, an American. And as an American, we have the right to stand up to our leaders, and ask them, "What the hell are you thinking?". And this is one of those instances when ALL American's should stand up for what they believe in, for what they think is in the best interests of the country, and say, "We want our snus. We know the facts, and provisions to PACT MUST be made." If enough people speak up, someone WILL listen. Abraham Lincoln said, "To sin by silence when they should protest makes cowards of men.” Do not let your voice be silent - VOICE your conerns. Stand up for what you believe in. It is YOUR RIGHT as an American.