The long awaited Nick And Johnny (Black) has arrived! I haven't actually reviewed Nick & Johnny (Strong Portion) as of the date of this writing, but I can say it's a great snus. And alot of die hard snus fans swear by it. Although it's not a regular for me, I will say that it's a very good one. And I really enjoy General Onyx, so I was quite curious to see what Swedish Match had up their sleeves for this one!

NOTE: This product has recently been re-released as a white portion and rebranded "Nick & Johnny Strong White" - or N&J White Heat as of 2011. 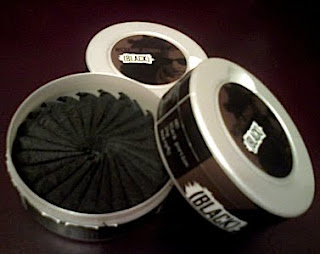 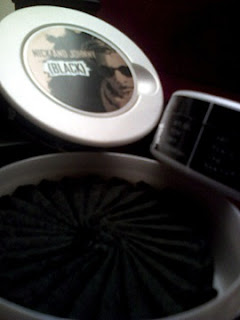 Upon opening the can, the aroma is clearly different from N&J Strong. Whereas in N&J Strong, the aroma of citrus is very strong, but in N&J Black, it's not as strong as the aroma of N&J Strong, and is very balanced with the other elements of this portion. The flavor of N&J Black is slightly similiar to N&J Strong, but there are differences that seperate the two. The flavor of N&J Black is strong, but seems to be more balanced than N&J Strong. Of course, flavor is in the mouth of the snusholder, so your results may vary. The flavor of citrus isn't the familiar bergamot I'm used to, but reminds me more of a grapefruit, it's rather tangy, and is perfectly balanced with the salt and pepper notes which mellow in with the smooth tobacco flavor. I can't get over the citrus in this one though, it's very tangy - more so than any snus I've had in a while, and I really enjoy it. This is one of the most balanced snus in terms of flavor that I've had in a while. Add that with a great nicotine kick, and N&J Black is a much welcome addition to it's older brother N&J Strong.

In case this review is a bit confusing, I'll try to clarify a tad. N&J Strong has a strong taste. So does N&J Black. But the N&J Black has a very tart, stronger citrus flavor. The flavors seem alot more balanced than in N&J Strong, but that doesn't mean that N&J Black's flavor is weak. N&J Black reminds me more of Onyx than Grov Black, but it doesn't taste much like Onyx, it's just the closest thing I COULD compare it too.
Posted by Chad Jones at 7:48 PM