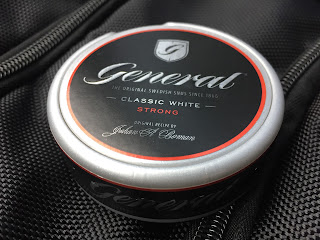 Want a stronger snus, but in a white portion with a great taste? General Strong White may be right up your alley. Earlier this year, as I was trying various different types of snus and trying to find my way, I was a full time Thunder Frosted user. When I began to experiment with various different types of bergamot snus, I found my way to General (as most new snus users do in the long run), and began to use General White Portion, which is one of my regulars. I began to fully appreciate the flavor of bergamot, the citrus notes, the pepper, it truly is a classic experience and you can really taste the heritage in snus when you use General Snus.

2015 Update:  The can currently says General Classic White Strong.  In 2009, this product was called General Sterk: The Norwegian Edition.  Back then, strong portions were relatively new and primarily marketed for Norway, so this product carried a name to reflect its audience of the day. 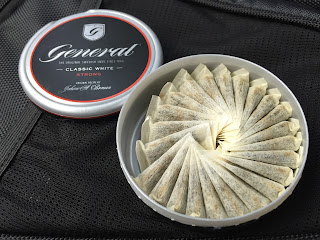 General Strong White comes in a White Portion and is arranged in the classic Swedish Match star pattern. The portions are slightly more full than General White portion, and being arranged in the star pattern - they are a bit thicker in the end and thinner towards the center of the can, so a little fluffing is required to make it just right.

The aroma is that of citrus, with a smooth peppery smell mixed in with it. The flavor profile is quite similar to what you would find in General White Portion, The flavor begins as a mild flavor of citrus, and a flavor of pepper blends in gently and balances with the citrus. There is a mild salt balance in the background which mixes perfectly with the citrus and pepper notes. The nicotine slowly comes in and provides for a great experience and just the kick I wanted in a strong portion snus. Unlike the Ekstra Sterk, the drip is very mild, and doesn't come on until the very end of using the portion. I also found the flavor profile more enjoyable than the Ekstra Sterk, but just as good as General White Portion, with a little more of a kick.
Posted by Chad Jones at 6:48 AM