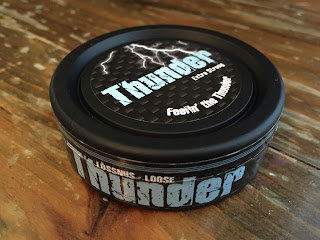 I never thought I'd see the day, but V2 has answered my prayers and the requests of many Thunder Frosted users and released Thunder Frosted in lös. Every delivery I received this week I was hoping was my Thunder Frosted lös, but I was sadly disappointed. It finally showed up this afternoon, and I couldn't wait to try it out. I felt like a kid at Christmas.  There aren't many loose snus flavors out there, and this one is definitely one of the better ones.  Thunder Frosted is one of V2's most popular flavors, and the Frosted line is one of the most popular mint flavor profiles in the snus world. 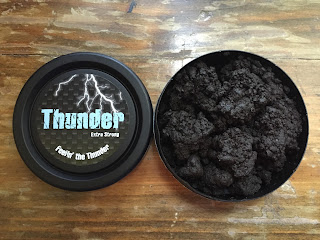 Thunder Frosted lös takes everything that is good about Thunder Frosted to the next level. When I opened the can I caught a strong, but pleasant aroma of spearmint. The smell and the flavor are greatly enhanced. This being a stark snus, it packs a strong kick. I've been using alot of regulars lately and less stark snus so it came on quite strong. The flavor of Thunder Frosted lös is alot like the portion, spearmint. But the flavor is more enhanced, more pure. From start to finish there is a strong, but mellow flavor of spearmint which is the predominant flavor.  There is also a mild flavor of tobacco mixed in the background.  I kept the pris in for a quite a while, and the flavor lasted the whole time, with very little drip and no mudslide. I was very excited to try this. I'm glad V2 listens to the snus users and put this out there for us. This snus does not disappoint!
Posted by Chad Jones at 10:52 PM