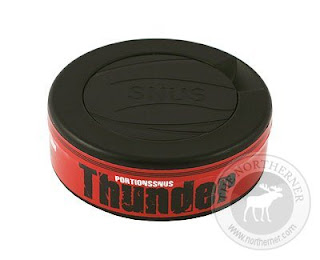 Over the past month, I've had the opportunity to sample 2 batches of a new Berry Blend from V2 tobacco under their "Thunder" label. The first batch was decent, but the second batch really shined. The second batch came in 2 cans, marked simply #1 and #2. My reviews of both cans are below:

This was a very interesting product, and my favorite of the two. The portions were moist from the getgo, but with minimal drip.
When I opened the can I immediately detected a familiar smell. My favorite candy - Jolly Rancher Watermelon. I don't know if this was intended, but it is a very predominant flavor. I couldn't WAIT to try this as soon as I smelled it.

The flavor is immediate. First, I felt a cool, mild sensation - possibly hints of menthol, it was the same first sensation I get with Thunder Frosted that I enjoy most. As this mild flavor continued, the rest of the flavors begin to come in. Just like I smelled, watermelon. Along with watermelon, a very subtle hint of cherry was in the background. If this was an effort at Watermelon Ice, or Cherry Ice, or something of that similar variety, you did a great job. If not, you still succeeded in creating a snus with a VERY unique flavor. The nic hit was very good, strong - I dunno the content, is this a sterk? It provided a great kick to go with the great flavor.
I used this one several times in a row and noticed the same thing each time. A mild menthol flavor in the beginning, watermelon coming in as the predominant flavor, a mild hint of cherry, and a very mellow salt balance in the background, hardly even noticable - as the fruit flavors were stronger and longer lasting than anything else. This is a great product, I liked it more than the single can you sent to try last time, the flavor in this was alot more pure and unique than anything else I've tried on the snus market.
I tried Nordic Ice Wild Cherry to compare after I used this one, and the flavor of the Nordic Ice is bland and weak by comparison.

Klondike Cherry Blast was my next comparison, and it also seems weak and bland, very boring in comparison to this one.
Third comparison - Jakobsson's Ice Fruit. The Jak's had a good fruit flavor, but way too salty, and the fruits aren't as pronounced as the ones in the V2 #1 can.

So in comparison to three other fruity snuses I tried, the V2 variety was much better. Great job on this one, I definitely would like to see this on the market. Often times, snus pairs great with drinks - Bergamot with tea and citrus wine, for example - and I believe this one would accompany alot of fruit flavored drinks, which is something the snus market is lacking. Right now Jakobsson's Ice Fruit is the only similar product being offered, and it is nowhere near as good as this one.

This one had a different smell from Can #1. Whereas I picked up hints of cherry in the first one with a strong watermelon overtone, this can has a strong aroma of cherry. It was very nice. There are few snuses that I can smell and really enjoy (Thunder Frosted being one), but this one, I couldn't take my nose away from it. It is a VERY pleasant smell.
In the beginning, I picked up the same thing as the last one. A cool, menthol flavor - same as what I pick up immediately with Thunder Frosted. I enjoy this, I should mention, I think this is a great greeting flavor for snus. Usually most come on mild, or with some - not at all. But this one is immediately. With the flavor coming in shortly thereafter, within a few minutes.

The flavor I picked up predominantly in this one was cherry. However, it mixed with more berry flavor/another berry flavor in the background. So it seemed like a mixed berry snus with cherry in the forefront. This one has a very mild salt flavor in the background which I think is actually beneficial to the snus, it provides a great flavor balance all together. Although I didn't like this one as much as the first one, that's not to say I didn't like it. If either of this make it to stores or to the snus market, I would buy either. This one has a great cherry/mixed berry flavor with a smooth minty/icy overtone, and a mellow salt balance tying all the flavors together.

I compared this with the two I compared the above to, Klondike Cherry Blast and Nordic Ice Wild Cherry (since i picked up alot of Cherry in this one), and I found the others to be mild and weak compared to the V2 product which has a superior, long lasting flavor.

Currently, Northerner has this available for preorder. http://northerner.com/en/snus/Northerner_Pre-Order_Snus-436/ and is marked for release week 47 of 2009. (16 Nov 09). I don't know which will be the final release, but both cans were exceptional and it's a win win if it's either one of them. Look for it on store shelves soon!
Posted by Chad Jones at 10:27 AM