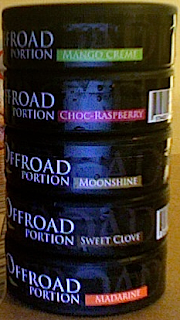 Let it never be said that V2 isn't creative. In 2008 they released a limited edition with flavors such as Hot Honey, Wild Strawberry, Brandy Alexander, Eucalyptus and Orange. In early 2009, under the Nordströmmen line, they released a great lös collection with flavors such as Brandy Alexander, Mandarine, Dark Vanilla, and Chocolate Raspberry. And now, Offroad Limited Edition 2009 with flavors such as Chocolate Raspberry and Mandarine (returning from the Nords line, this time in portion), and adding on Mango Creme, Moonshine, and Sweet Clove. Alot of creativity went into this - and the snus was tested by actual snus users, and V2 listened to the response that was given to formulate this new line. You won't see that with cigarette companies, one of the things I love most about snus is the fact the snus makers LISTEN to their customers.

This year, they come in a very cool shiny metal tin with the Offroad logo on the outside and "Limited Edition 2009" underneath. It makes for a great collectors item, because we know snus lovers keep their cans. We know about that stash of old cans in your closet. Now, about the snus. First of all, this is a great line. I mean, it's really good. I thought the Nord's los line was great, but this takes it to the next level. Alot of research, testing (with real snus users), and love went into making these, you can tell from the moment you open the cans, to the time you take the portion out. About the portions - wow. These are among the most comfortable I've ever had from V2, let alone the most comfortable snus portions I've experienced in general. The snus is very soft, no fluffing necessary! Just out of the can, and into the mouth.

Mango Creme. Upon opening the can, a fresh, sweet smell of fruit grabs your attention. It is one of the most pure, great smelling snuses I've ever had. I couldn't wait, I immediately grabbed a portion and put it in. Amazing! The flavor hits immediately. These portions are different from anything I've ever had before. I've never had a snus with a flavor that hits so quickly! V2 has captured the flavor dead on. It tastes just like fresh mango. It's not overly sweet, and the flavor of mango is very pure - very natural. It is slightly sweet, but it is not overbearing, and a portion you can keep in for a long time.

Mandarine. My second portion I tried was just as good as mango. I was very excited to try this one. It has a slightly sweet, but pure and simple smell of fresh oranges. The flavor is amazing. Not overly strong, but very pleasant and mild, the taste of pure orange captures your senses from the moment you open the can, to the very end. It reminds me alot of the Nordströmmen mandarine, and that's a good thing! Because that was one of the better ones out of the los collection, I found myself reusing this one more than the others! Just like with Mango Creme, the flavor was hit dead on - a very enjoyable orange flavor.

Choc Raspberry. This was the one I was looking forward to the most. This was my absolute favorite out of the Nordströmmen los line, so I couldn't wait to try this one. I am pleased to say everything I loved most about the los carried over into the quality, aroma, and flavor of the Offroad Limited portion. The aroma is very pure, and not too sweet - but smells of chocolate with soft notes of raspberry. The flavor comes on strong from the very beginning, no holding back! A mellow flavor of chocolate mingles gently with the pure taste of raspberry - first as subtle notes in the background, but then mixing into a full, pure mix of chocolate and raspberry - carrying on strong until the very end. Great job, V2. The flavor of this was also captured very accurately.

Moonshine. I was very wary of this one. And sad to say, I didn't like this one. The smell...the taste....it just wasn't for me. The aroma is strongly of alcohol, I want to say bourbon, because that's what it smelled like most to me. The flavor had no sweetness, was slightly bitter, and in my mind tasted mildly of bourbon. But it just....I dunno, didn't feel right. Not to say alcohol flavored snus is bad - because I like Probe Whiskey. But this one just didn't do it for me. Not to say others won't like it, but in my opinion the weaker one of the line.

Sweet Clove. I was quite excited about this one. As many of you know, recently the FDA banned clove flavored cigarettes. Which was quite sad to me - because although I quit smoking, Djarum Black is a cigarette that I can occasionally enjoy, much like a fine cigar. I love the flavor of cloves. I like them in incense (the aroma is almost intoxicating), in Chai Tea, I mean...anything. Cloves are great. Upon opening the can, I was surprised to see that the snus actually did smell of cloves. Not of pure, straight up clove...but a sweeter clove. And I like that! This, in my opinion, had the most pleasant aroma of the whole line. The flavor of this comes on quickly, and is one of the best flavors I've ever had in a snus. I SERIOUSLY hope V2 adds this flavor to their regular line. It's THAT good. The flavor is - of course - of cloves, pure and simple. Not as strong as the cigarettes I've had in the past, or of the flavor of just cloves, but of a more simple, pure clove flavor, slightly sweet, but not overly sweet. It's hard to fully explain, but V2 did a great job of capturing the flavor of clove and translating it in such a way that it makes a great flavored snus.

V2, kudos to you. Always releasing great new products, keeping it original, and continuing to be innovative with these lines of snus that come out under the V2 company. It's sad, knowing this is a limited edition. Granted, I could do without Moonshine, but the others I could definitely see myself ordering again. Sweet Clove, for instance, should definitely stay around. Offroad Limited Edition 2009 is a great line, and a great way to end out the year.
Posted by Chad Jones at 11:37 PM