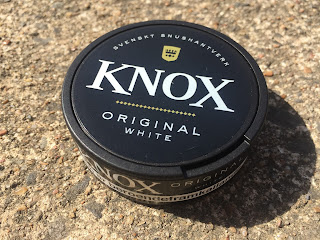 Review Updated 22 August 2017:  It's been a while since I reviewed Knox White Portion so I felt I needed to update the photos and intro to this review.  The review below is the same, however.  Now, when I first reviewed Knox White back in 2009, it was called a "budget" snus. Even the flavor description from SnusCENTRAL says, "Knox White Portion Snus, from the makers of Skruf snus, is a value priced white portion snus with a classic yet medium robust tobacco flavor."  However, it appears that it is now a regular priced snus.  At SnusCENTRAL.com it’s $0.69 more expensive than General, at BuySnus it’s $0.03 more expensive than General.  At Northerner.comI found it was $0.10 cheaper than General.  It's $1.48 cheaper than General at SnusBolaget, so maybe it's cheaper in Sweden than General, but everywhere else it's around the same price or more.  I found out this summer at the 2017 St. Louis Snus Con from Skruf Snus that Knox is the number 2 brand in Sweden now, so that may be why it costs more.  I always thought it tasted better than most value priced snus products, so that may be why it costs more. 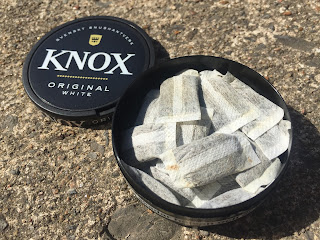 Upon opening the can, I was greeted by a lightly sweet aroma of citrus. It was almost like a sweet citrus wine, The portion material is moderately soft, and quite comfortable in the lip. The portion has a medium moisture level, so it's not too dry, not too moist, but just about right. Knox White Portion has a mild, but simple tobacco flavor. The citrus notes are very balanced with this, and have a very slight sweet taste with a very light salt balance in the background. The flavor held true to the aroma I smelled when I first opened the can. A mild, slightly sweet citrus flavor.  I'd say this snus is a more mild General White Portion.  The nicotine content is said to be "medium", but it feels to be about regular strength if I had to guess.  I'd put it around 8mg/g if I had to put a number on it.  The flavor lasts quite a long time; I've been able to enjoy this snus for up to an hour!

It's pretty tasty, I definitely suggest trying it out!
Posted by Chad Jones at 1:06 PM