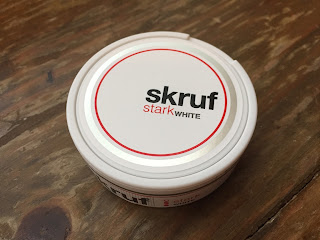 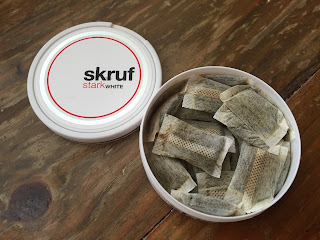 The flavor description of this one says, "Skruf Strong White is a stronger version of the representative Skruf Original White when it contains no more tobacco leaves than its predecessor. Skruf Strong White also has lower humidity allowing snus less runny."  That doesn't say much about it, but just know it's similiar to most Skruf products, just with more nicotine.

When you open the can you'll notice the portions are white, but not too dry.  You can see they do have a little moisture soaking through the pouch.  The aroma that comes through is a gentle, mellow citrus aroma, a little sweetness and a touch of pepper.  For a white portion, the flavor comes on pretty quickly.  The bergamot flavor is pretty mellow and not too bitter.  It's very gentle.  There is also a nice sweetness that comes through from the rose oil in this snus along with a little bit of pepper and a touch of salt in the background.  It's a great tasting snus!  This is a stark portion, so it's going to be stronger than your regular strength snus but not as strong as an extra strong.  You'll notice a little extra nicotine in it, but it's not going to knock you out.  If you're looking for a great tasting traditional flavored snus, this is one to check out!
Posted by Chad Jones at 9:42 PM