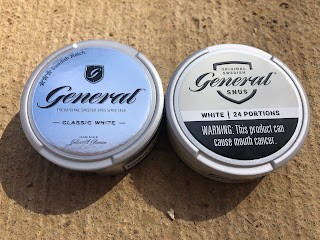 General Snus is the king of Swedish Snus, in my opinion, and it's my personal favorite snus.  When I think of Swedish Snus, my mind always goes straight to General.  From the heritage, to the taste - nothing beats it.  The General Snus line recently got a new look, in the US and in Sweden, so I figured it was time to revisit it!  In this picture, the bronze can (right) is the Swedish market can, and the tan-ish can (left) is the US market design.  One thing I want to be clear about is this - General Snus sold in Sweden and General Snus sold in the US is the exact same product, only with a different design!  I get that question often, so I wanted to clarify.

General White Portion's flavor is described as a "Spicy tobacco character with elements of bergamot, as well as tea, hay and leather." General White comes in a 24 gram can with 24 portions, for plump 1 gram portions. The nicotine content is 8mg/g (0.8%) which breaks down to 8mg/portion.

The General Snus story goes all the way back to 1849.  In 1849, Johan A Boman started a tobacco company which would, in 1861, become JA Boman and Co. In 1866, he would launch General Snus. The story says that Boman wanted to create the best snus the world had ever seen or experienced. Mr. Boman had a magical nose, and was an expert in blending flavors. He was also very patient. To develop General Snus he spent 1500 days developing developing a recipe with 22 types of tobacco, which came from the world’s finest plantations. It also included the addition of a drop of bergamot oil, which complimented the spicy tobacco blend. This is what we know today as General Snus. Today, it is still produced according to his recipe, which remains a closely guarded secret. Round cans launched in 1967, and the portion format launched in 1977. 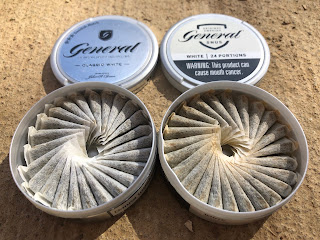 When I first started snus, the name "General", to me, seemed very...general. But, this snus is anything but basic. When you open a can of General White Portion, the aroma that comes through is a mild smell of bergamot, an earthy tobacco smell, and a touch of pepper. The portion material is soft and feels great in the lip. Since these portions come in the star formation format, they are wedged, so I suggest fluffing them to move the tobacco around and make them more fluffy. The flavor is delicious! If you've never had General Snus before, it is a truly unique flavor. Up front, you will notice a citrus flavor from the bergamot used to give General it's traditional flavor. Behind the citrus you'll experience an earthy tobacco flavor, a light taste of salt, and a spicy peppery flavor. In the white portion, the flavor is milder than you'll experience in the original portion, but it still has the classic General flavor. The nicotine strength is 8mg/g and feels to be about the normal level. The flavor also lasts quite a while; I can keep a portion in for an hour and still enjoy the taste!

General Snus, in my opinion, is the best snus around.  It's been a snus I've used daily since September of 2009.  And the best way to experience it is with General Lös, or General Original Portion.  If you're in the US, you can buy it locally by hitting up the store locator at GeneralSnus.com!
Posted by Chad Jones at 11:36 PM