Lately I've been exploring alot into the "non-flavored" realm of snus, and I've been enjoying what I found. This past week I've been trying three from the General line-up. General Silver, General Onyx, and General Maxi. The one thing going into this I was worried about was that they would all taste the same. This was definitely not the case, and I was pleasantly surprised to find that each product stands alone, with it's own unique attributes to make it stand out. 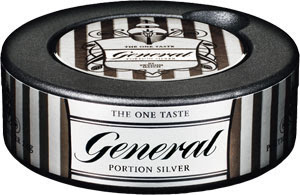 One of the many products I tried over the past few days from the General line was General Silver. I haven't seen many reviews of it, so I didn't really know what to expect. It was a unique experience, because as I've been trying alot of the "unflavored" or "bergamot" snus products lately, it's been a new world for me, because I haven't known what to expect. That, and my tastes have evolved (finally) to include these in the list of snus that I enjoy.

A more correct name for this product would be General Mild. Because in all senses of the word, that's what it is. To be honest, I could have tried this months ago and probably enjoyed it, because all the flavors are very subdued and mild. General Silver is an original portion, and has a lower nicotine content than most larger sized snus. Each 1 gram portion has 6mg of nicotine. (remember, Original General has 1 gram portions with 8mg of nicotine per portion).

That being said, a little about the flavor. General Silver is very balanced. I say that because there isn't really a predominant flavor - every flavor that comes through is in hints, and is very subtle. Very balanced. Nothing overpowers anything else. With each portion you can equally taste the citrus, the tobacco, and the salt and pepper are equally balanced in the portion. Which is why I would say "Mild" is a fitting name for this - in both nicotine and in flavor. True, you DO get hints of the flavor. But none of it is strong or dominant. Each flavor that most General portions are known for is very present, but very mild and subdued.

Like I said, if I would have tried this months ago I would have liked it. But seeing as how it came after I had tried General White, I do find it to be a bit....average. Not saying it's not good, just not for me. However, I would strongly suggest it to anyone (like me) coming from a flavor-exclusive world to expanding tastes like I have experienced lately as the flavor is mild and balanced just enough that it would be a great first snus to try out and get a "feel" for snus of this variety, but if you are already in the Bergamot Club, you might find it to be a bit average. 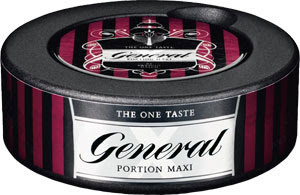 When I started trying out different General Products, this was the one I was looking forward to most. Maybe it was that "coolness" factor of a snus of this size. General Maxi is big in all aspects. Portion size, nicotine, flavor, it doesn't disappoint in any area. This was a hard one to review, because the flavor was so surprisingly complex, that I had to take alot of time, try alot of portions, and go through a can before I could even detect what the most pronounced flavors were, what the hints were, and just what it was that made this snus so good.

The portions are original portions, are are 1.7 grams each. (remember, most regular portions are about 1 gram each). The nic content weighs in at 14mg per portion. Note, General Ekstra Sterk is 15mg per portion, so this portion is LIKE a sterk, in the sheer fact that the extra 0.7 grams make a difference. The can has a unique burgundy stripe pattern across it, and in front behind the General logo is a big X, as a representation of the maXi portion. Upong opening the can, the smell that hits is predominantly pepper, the citrus is only in the background along with a little aroma of pepper coming through. One thing I liked about General Maxi (and I tested 2 cans), each portion was full and packed. No fluffing required. Just take out of the can and into the mouth. Each portion is big, and felt like having a nice pris of los in my lip. I could feel a definite change in the amount my lip sticks out. It was a considerable different from the regular sized portions I'm used to.

A good phrase for General Maxi could be "Big on size, Big on flavor." Because in both aspects, it does not disappoint. The flavor of General Maxi comes through in a major way. A very pronounced tobacco flavor is one of the main components of General Maxi. I picked up hints of Lemon and Bergamot, I separated the two because they both came through in a very unique way. These flavors blended with a very mild balance of pepper and salt, but with a subtle sweet taste coming through and mixing it up with the citrus notes. This snus has a very strong flavor, but it was also very complex. After having it in for a few hours, the tastes continued to mix, blending together into a sweet overtone that gently enhanced the tobacco in the most unique way. Big on flavor. That being said, General Maxi was not what I expected. I thought it was just "GRRR BIG PORTION" that would be lacking in the flavor department. But that was not the case. General Maxi is a large portion, big nic hit, and a strong flavor. I'm glad it was one of the last ones I tried, right before General Onyx, because if this would have been the first, I would have been caught a bit offguard. But if you're looking for something with a big, strong tobacco flavor, a mellow balance of salt and pepper, hints of lemon and bergamot, and a slightly sweet flavor mixing it all up, this is the ticket. I ordered a few more cans mid-way through testing these because I knew it was going to be something I would enjoy.
Posted by Chad Jones at 10:07 PM