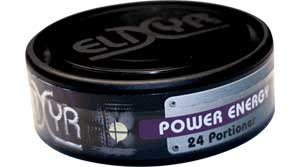 I have been waiting a while to write this review because I wanted to give it some time to grow on me, and get used to it. At first, I didn't like it, to be honest. The smell was a bit strong and the taste wasn't that great. But as I used it more, the smell was less noticeable, and the snus worked it's way into my regular rotation. Now, after a month of using it regularly, I can officially say that it is a staple in my collection and one of my two first thing in the morning products.

Elixyr Power Energy. Part energy drink. Part snus. Caffeine, taurine, nicotine, oh my! For those of you who are using to smoking/snusing first thing in the morning, but also need that energy drink/coffee - this is a good way to combine everything you love in one portion. Accoding to Northerner - in the portion there is 2.83 Mg of Taurine and 0.28 Mg of Caffeine in this snus, which is a sizable amount. Now that we have the specifics out of the way, I'll talk about the snus.

I heard about this a while back and bought a can and used it sparingly. However, a good friend of mine uses it regularly so I thought I would begin to try it regularly, as a first thing in the morning snus for about a week. Well, a week turned into a month, and it's still in my morning rotation. Most of what I've heard about it has been bad. People open the can and say "it smells like cat piss", and quickly shrug it off and put it away. But all I can say is give it a chance. Seriously.. It's not that bad. I mean, really. It's alright.

Opening the can the first time does hit a bit hard. But give it a try, work it into rotation, and you'll be glad you have it first thing in the morning. The taste is slightly sweet (very slightly), with hints of lemon and of course - tobacco. The portions are comfortable. It's a good pick me up. Better than the other varities of snus toted as "energy snus" - such as Northerner's variety, and the terrible, no good, very bad awful Oomph Energy Snus. Can't stand either of those products, but Elixyr definitely does it's job. So if you want a pick me up snus, pick up some Elixyr Power Energy. It's not the best, but it definitely does what it's intended for, and that's give you nicotine delivery along with a little extra energy.


NOTE: This product is one that is currently not available from Northerner.com. If you'd like to enjoy this snus, we suggest buying it from our friends at BuySnus.com.
Posted by Chad Jones at 7:12 PM