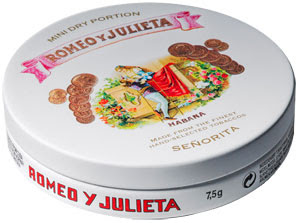 I recently came across a can of Romeo Y Julieta Senorita (mini portions). And I felt like sharing a review.  I won't count this as a Swedish Snus (although it technically is - but made with Cuban tobacco), and going with the general topic of this blog, transitioning Snus users from American to Swedish I don't suggest this as a first snus, but once you've had a few it is a very interesting little detour or an occasional snus.  Much like a Cuban cigar to a cigarette smoker, it's a nice little "treat".

The can is really unique, unlike any Snus can I've ever had before. It is a metal tin, feel like it's made of the same material the American Camel "SNUS" is made out of.

The portions are of course mini, and are packed full, and are also about the same size/shape as American Camel "SNUS", VERY comfortable mouthfeel. (this is where the comparisons end with that, I promise). The can is a little hard to open, it's kind of awkward until you figure it out. Upon opening it, I was greeted with a smell unlike anything else. This snus being made with Cuban tobacco gives it a very unique taste in smell, unlike any other snus I've ever had before. The smell is much like the smell of a Cuban cigar, slightly sweet, but yet smells of tobacco.

Upon putting in a portion, I realized it was quite dry, so I took it out, misted/prewet it, and put it back in, and was greeted with an amazing flavor. It was a sweet/peppery flavor, very unique and not like any other flavor I've had in snus before. The flavor was long lasting, and stayed consistent the whole way through. The nic hit was mild, it provided a mellow buzz which was enjoyable and perfectly matched with the sweet but yet mild flavor of the tobacco.

All in all, I found it to be a very good snus. If you come across some, I suggest you try it.
Posted by Chad Jones at 11:34 AM