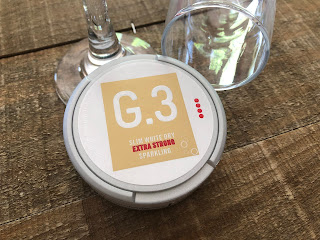 Swedish Match sure does dig the champagne/"sparkling" flavor it seems. They're back with a new sparkling flavored snus: G.3 Sparkling (Slim White Dry)!  To do a quick history, this flavor began in January of 2018 with Small Batch #1: Champagne.  It proved to be popular, and was released as a limited edition product called The Lund Edition in July of 2018.  The limited edition went away, but a full time version launched in May of 2019, to celebrate the 100 year anniversary of Göteborgs Rapé:  Göteborgs Rapé XRANGE Sparkling (Slim White).  An all white version would come in July of 2019: G4 Fizzy, which contains white tobacco.  And, in September of 2019, a nicotine pouch version: Zyn Lemon Spritz!  Not only that, but a chew bag version was launched by V2 Tobacco/Swedish Match in 2019:  Göteborgs Rapé Sparkling Chew Bags.  And today, we're talking about their newest one!

Their flavor description for this one says:  "Light tobacco character with elements of apple, elderberry, and hints of citrus and lavender."  Each can weighs 16.6g and has 24 portions, for 0.69g portions.  The nicotine content is 26mg/g (2.6%), or 17.94mg/portion. 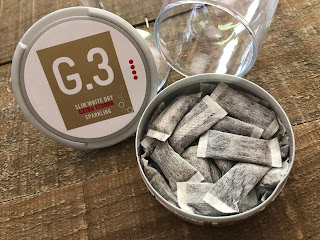 So, I really enjoyed the Göteborgs Rapé XRANGE Sparkling (Slim White). However, I found I can burn out on it if I use it too much. With this one, the slim white dry format seems to mild out the flavor, and I find it's not something I can burn out on so easily!  This one seems to be a white dry version of that one, but with more nicotine.  The aroma is a gentle smell of citrus with a hint of pepper, a light touch of apple, and some mildly sweet floral notes.  The portions are slim, white, and of course, dry.  They're not too uncomfortable, though.  The citrus flavor is mild, and in the front, and comes through with a light touch of pepper to it.  There's a lightly sweet, fresh, floral note to it.  In the background, there's a mild hint of apple, and a gentle tobacco character.  The nicotine level on this one feels to be between strong and extra strong, and the flavor lasts well up to 1.5 hours on average!

As far as this one goes, it seems to be GR Sparkling, but better.  I like the milder approach to the flavor, as it makes this snus much more easy to use as an all-day snus!  Also, shout out to my friends at NordicLip.com who got ahold of this for me to review.
Posted by Chad Jones at 1:16 PM